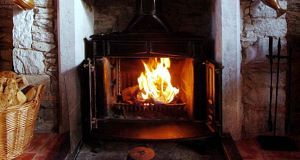 Irish cities may have to consider “no burn night alerts” banning the lighting of solid fuel fires after new data shows Cork City had the worst air quality in Europe.

The data was recorded by a network of air quality sensors which have been deployed across the city as part of a pilot project, involving Cork City Council and the Centre for Research into Atmospheric Chemistry (Crac) at UCC. It is the only network of its kind in the country.

The US-made PurpleAir sensors, which are deployed in cities across the world, use wifi to monitor air pollution in real-time. The devices, about the size of a 33cl drinks can and costing up to $300 (about €270), monitor the level of harmful PM2.5 particles in the air. The particles have been linked to premature death.

The network of 12 devices in Cork recorded a spike in PM2.5 on Monday to give the city an Air Quality Index (AQI) of 156 — more than double the rating for London and more than triple that of Rome. Exposure to rates that high puts the health of vulnerable people at risk.

While the graph began rising from mid-afternoon, it peaked between 6pm and 10pm. One monitor on the northside of the city peaked to show a AQI of 330 around 9.30pm.

The Environmental Protection Agency (EPA) also confirmed that data from one of its air quality monitoring stations in the city rated the air quality as “poor” at around the same time.

Prof John Wenger, a joint founder of Crac, said the burning of solid fuels was probably the main cause of the spike but he said the topography of Cork City combined with Monday’s weather conditions — a very cold evening which resulted in people lighting fires, and little or no wind to disperse the smoke, made the problem worse.

He said people have an almost romantic attachment to an open fire, but added: “Once people become fully aware of the pollution and harm such fires cause, it may cause them to think twice about burning solid fuels, particularly in a city environment.

And while the PurpleAir devices are not as sensitive or as accurate as the city’s four hi-tech monitors, they do provide valuable data which match or track the peaks in air pollution recorded at the UCC monitoring station.

“They show trends and they give a good indicative measurement of air quality. They probably over-estimate the figures a little bit but they put us in the ball-park, and allow us to identify hot-spots and compare sites,” he said.

It is hoped that the results of the study will also inform the preparation of the city council’s air quality management plan.

Despite the spike in air pollution in Cork, there has been no corresponding increase in the numbers presenting with breathing difficulties at Cork University Hospital’s emergency department.