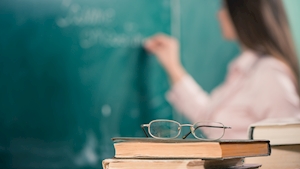 The reopening of schools is “likely to be staged and difficult”, a teaching union representative in the North has said.

Mark Langhammer of the National Education Union told Stormont’s education committee that when schools return there should be a “recovery curriculum” to help children readjust to the classroom.

Some schools have remained open throughout the pandemic to accommodate the children of key workers.

Details of how the rest will fully reopen have not yet been announced.

“Realistically 2020-21 will be an unusual year also, it won’t be business as usual because reopening is likely to be staged and difficult,” Mr Langhammer said.

“Obviously schools will not be accommodating all pupils at all times so home-based learning will remain at least in part.

“My best guess would be that somewhere between 20%-40% of staff would be unlikely to be able to return due to underlying conditions, shielding, caring etc.”

He said teachers have been “doing their best” to provide daily teaching videos and work packs.

“We would like to look at the transitional framework for learning, a recovery curriculum, because the the immediately focus in returning to schools should probably be care, recovery, resilience and well-being,” he said.

“We think our priority has to be about creating a new normal, reintegrating pupils, providing a reassuring environment, focusing on re-socialisation, re-establishing patterns and the habits of learning.”

Committee chairman Chris Lyttle said it has been suggested that the current school year be “restarted”.

Justin McCamphill of the NASUWT said that as the school year was two-thirds complete before lockdown, he did not feel it would be necessary to repeat the year.

Earlier the committee agreed to write to selective grammar schools in Northern Ireland to ask whether they have any contingency arrangements should transfer tests not take place later this year.

The Archbishop of Armagh, Eamon Martin, has urged that independently set tests be cancelled this year due to the uncertainty. However, Stormont Education Minister Peter Weir said there is no “viable alternative to put in its place”.

The tests are set by private organisations AQE and PPTC, and are not regulated by the department.

Mr McCamphill said his union is not prepared to ask primary school teachers to place P7 pupils in rank order for selection purposes in the way that GCSE and A-level grades are set to be decided.

He said he was not aware of any contingency plans by selective grammars in the absence of tests.

“Because these are not statutory tests, there is no consultation with trade unions at any stage, so we are totally out of the loop on that,” he added.

Failing to comply with restrictions slowing fight against outbreak

Over 100 people fined for breaching travel restrictions in Wicklow

2,000 student nurses and midwives to leave placements to free up trainers