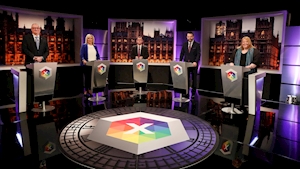 Senior figures from Northern Ireland’s political parties have clashed over Brexit and representation at Westminster just days before voters are due to go to the polls.

Although billed as a leaders’ debate, DUP Lagan Valley candidate Jeffrey Donaldson appeared on the BBC NI show this evening instead of his party leader Arlene Foster.

Of the other four main parties in the North, Sinn Féin was represented by vice president Michelle O’Neill, the SDLP by its leader Colum Eastwood, the UUP by leader Steve Aiken and Alliance Party by leader Naomi Long.

The live debate, which was chaired by presenter Noel Thompson, started with a question from a member of the audience: “Do you believe Brexit makes a united Ireland more likely?”.

SDLP leader Colum Eastwood responded saying he believes the first thing to be dealt with is “the emergency that is Brexit”, and called for a second referendum to “stop this Brexit madness”.

Brexit will destroy our economy and harm our peace process. There is no good Brexit and we can stop it, by voting for people who will support a People’s Vote @columeastwood #BBCNIDebate pic.twitter.com/qkG7bhE3xU

The DUP’s Jeffrey Donaldson said he doesn’t believe there is a threat to Northern Ireland’s position within the UK, and he opposed a second referendum on Brexit.

He slated “poor negotiation” on behalf of the UK Government, and restated his party’s opposition to Boris Johnson’s proposed Brexit deal

“My message to unionists is to send a strong unionist team back to Westminster, that’s what unionists want,” he said.

I have successfully defended the GFA, the all island and made sure there is no hard border on this island because Sinn Féin used our influence where it matters. Irish interests will never be served in Westminster. #bbcnidebate pic.twitter.com/WlcfF1AizI

She said it has brought arguments around borders back to the fore, adding: “the harder the Brexit, the more borders… the more likely people are to reconsider their position (on the constitutional question).”

Ms O’Neill came under pressure over Sinn Féin’s policy of not taking their seats at Westminster.

She insisted “one or two Irish MPs won’t make a difference”, in response to criticism by Mr Eastwood and Mr Aiken.

Mr Aiken put to Ms O’Neill that her MPs in the last parliament were often seen sitting in the coffee shops and questioned, “why not take your seats on the green benches?

“You are pretending you can go to Westminster and stop Brexit, that is nonsense,” Ms O’Neill told Mr Eastwood.

The SDLP leader, who is running in Foyle, restated that if elected he will take his seat in Westminster.

‘The reason we’re talking about borders in the Irish Sea or borders on land is because the DUP supported Brexit… The solution is to Remain.’ – @naomi_long

Ms Long also pressed Ms O’Neill over abstentionism who responded by saying her MPs will never take an oath of allegiance to the UK’s queen.

The politicians responded next to a question from the audience about whether a direct-rule health minister should be installed to deal with the ongoing crisis in the health service in Northern Ireland.

Mr Donaldson said “huge decisions need to be taken in NI”, adding he sees the impact on people suffering while waiting for treatment.

“We need the assembly back and we need it back today,” he said.

.@J_Donaldson_MP “our priorities are the health service, schools and the issues that matter in people’s lives.”

However, he went on to say if the talks to revive Stormont, due to start on Monday, do not result in agreement by the January 13 deadline, then direct rule should be considered.

“I think we have to look at handing it back to Westminster where people like me will be there to argue for Northern Ireland,” he said.

Ms O’Neill said direct rule is “not an option”.

“We can never go backwards, we can only go forwards,” she said, calling for a “very substantial” financial injection from Westminster, claiming the health service is “on its knees due to Tory austerity”.

Direct rule is not an option, we can’t go back, we can only go forward and we need to give people the hope envisioned in the Good Friday Agreement. #BBCnidebate #GE19 pic.twitter.com/chRq13DNzi

Mr Aiken said there is now a “health emergency”.

“The time has gone for faffing around… let’s get someone in place to make the political decisions now,” he added.

“Do I want to see direct rule? No I don’t, because I think it is a failure of devolution,” she said, however she said if agreement is not reached by the January 13 deadline, the Secretary of State needs to find “a form of government that actually can work” or call another election.

Mr Eastwood said no to direct rule, stating he wants to see Stormont back.

Ireland innomin - August 8, 2020
0
Garda checkpoints are being put in place in Kildare, Laois and Offaly to ensure people are complying with the local lockdown that took...

Wales innomin - August 8, 2020
0
Parts of the UK could see record-breaking overnight temperatures this weekend as the mini heatwave continues. London and the South East...

Wales innomin - August 8, 2020
0
Britain is to call on France to crack down harder on migrants attempting to cross the Channel by boat, including taking...