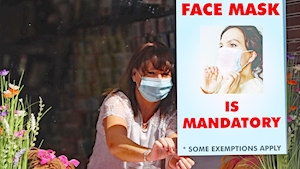 New supports will be announced today to help businesses in Laois, Kildare and Offaly through the current restrictions.

The localised lockdowns will be in place until August 22nd, if the virus is stable in those counties at that point.

After a meeting earlier this week with Tanáiste Leo Varadkar, local business leaders say they expect extra financial aid to be confirmed later.

Chief executive of Laois Chamber, Bernie Everard, says the negative effects of the restrictions are more than just financial.

“The reputational damage that it is doing to the three counties (Laois,Kildare and Offaly) is huge.

“For example I was speaking to a hotelier who had a conference cancelled for November. Other hotels have had September and October bookings cancelled.

She said the counties need support to repair the damage done to their reputation, as well as an extension to the wage subsidy scheme.

“Every day in the three counties is a lost day of revenue so time is of the essence and we need action,” she added.

It was announced on August 7th that new measures were being brought in by the government in Kildare, Laois and Offaly, due to the number of new cases announced in those counties.

The measures meant If you live in those counties you are only permitted to travel within your county. This is unless you have to travel for work purposes, attend medical appointments, provide care to a family member, for farming reasons or to return home to those counties.

The government also announced that “If you live outside these counties, do not travel to them. You can pass through these counties to get to a county that does not have local measures in place.”