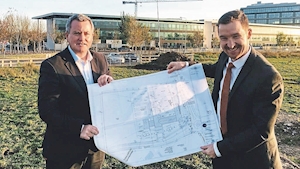 Limerick’s newest secondary school is to have gender-neutral toilets fitted on each of its three floors.

The Limerick Educate Together Secondary School said the facilities, which will be for students who do not identify as either male or female, will be installed ahead of its opening in September 2021.

The state-of-the-art facility, which will be built in Castletroy, will cater for 1,000 students and will create 100 jobs.

Principal Eoin Shinners confirmed the introduction of “universal” toilets, which come against a growing debate on the issue of transgender.

Mr Shinners said: “What does that look like in a school? Effectively, students when they go to a toilet block, they will have the option to go to a male toilet or a female toilet. What you will have is stand-alone cubicles.

“The only part of the student toilets which are communal are wash-basins. Parents might ask how you supervise boys and girls entering the same toilet block. But they’ve set up where wash-basins are back-to-back and there’s a screen visible from the corridor.”

He said there are students in the school “who identify differently” from the point of view of gender.

“Accept them for who they are without drawing particular attention on an aspect or an issue.”

Earlier this year, St Brigid’s National School in Greystones, Co Wicklow, confirmed it would be phasing out boys and girls toilets in favour of gender-neutral facilities.

Five soon-to-be-built secondary schools had also requested permission from the Department of Education to also introduce such facilities.

The school will boast almost 60 classrooms, a large outdoor learning courtyard, plus a sports hall with a state-of-the-art fitness suite.

A planning application is to be submitted shortly for the €19m scheme.

Mr Shinners said it will be “dynamic, bright and colourful” and promised “a fine building”.

Currently, the Educate Together school is located in temporary accommodation at the old Salesians Secondary School at the North Circular Road.

But it’s expected that by September 2021, its new school will open in the shadow of Northern Trust to serve the Castletroy and Monaleen communities.

Mr Shinners confirmed that eventually up to 100 teaching, special needs assistants and other ancillary posts will be created, as well as dozens of temporary construction positions, as the public project moves forward.

“The planning notice is up on site which is great news. As far as I’m aware, the Department of Education issued the planning documents to Limerick city planners last week. That will be an eight week process all going well.

“We don’t anticipate any concerns or objections to the new build. In the New Year, we’ll go out to e-tender, and have a delivery team appointed in March or April. We can then expect ground works to begin any time from then onwards. Then, you’ll see significant development in terms of the building itself being erected in early summer,” he told the Limerick Leader.

The Educate Together secondary school – the first of its kind in the city – will comprise of a U-shaped building, which at its heart will have a landscaped courtyard with 70 to 80 square metres.

The area would be used as a space for students to congregate, as well as an outdoor teaching environment.

Mr Shinners said: “The department is now looking beyond the traditional four walls of the classroom.

A special needs unit will cater for up to 24 students, while there will be different classrooms of different sizes.

In terms of sports, there will be a hall with a fitness suite, six hard-courts plus GAA, soccer and rugby playing pitches.The school will be built over three floors on the main section, with an additional section of two stories, and one final single-storey part.

With 1,000 students, Educate Together will represent the second largest school in the locality, just behind Castletroy College which has an intake of 1,200.

Educate Together schools differ from schools run by the church in that they welcome children regardless of denomination or where they live. Decisions are sought democratically with the views of teachers, students and parents all carrying an equal weight.

The new school in Castletroy/Monaleen will be the second new secondary school opened in the last five years, with Mungret Community College also in its early years.

Ireland innomin - December 4, 2020
0
Conor McGregor’s bid to cash in on his brand across the EU has suffered a knockout blow. This follows the Boards of Appeal at...

Ireland innomin - December 4, 2020
0
A Dublin man found in possession of a taser and house breaking implements for burglaries thought he had travelled to Cork rather than...

Thousands of retail jobs under threat after week of high street...

Dubliners don’t know where they are once they get past Grand...