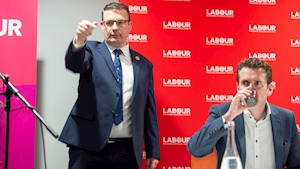 Aodhán Ó Riordáin or Alan Kelly will be elected as the leader of the Labour Party this evening.

Brendan Howlin announced he would be stepping down in the days after the general election in February, having spent four years in charge.

Counting is expected to begin this afternoon when An Post delivers the last postal ballots to the offices of accountancy firm Mazars in Dublin.

Returning officer Conor Power said to comply with social distancing rules, the entire count will be a one-man operation.

“We had a great turnout in the election,” Mr Power said. “I mean we are over 85% turnout at the moment which is a testament to the votes being sent out and the votes being returned by our active party members.”

“It’s actually been a very successful experience so far,” he said.

Mr Power said that the circumstances are “strange” for the count as he will be counting by himself with social media supervision due to social distancing guidelines.

“It is quite unusual,” he said, “But these are unusual times.”