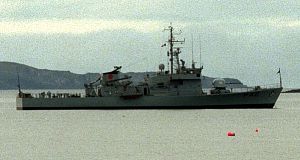 The Naval Service is so under-resourced that there are fears it won’t be able to combat maritime drug shipments while at the same time adequately patrolling EU fishery waters post-Brexit.

Concerns have also been raised that it may have to tie up yet another ship, due to debilitating manpower shortages.

RACO, the organisation that represents the country’s military officers, said that despite tying up LÉ Eithne and LÉ Orla last June, the manpower crisis is deepening by the day and “there are concerns that the tying-up of a further ship could be imminent”.

RACO general secretary, Commandant Conor King, said it is worrying that even the remaining ships “are routinely operating on the edge of the minimum workable crewing numbers”.

He pointed out that LÉ Ciara was on sailing order on December 30, but failed to leave port until January 1 due to illness/injury of crew members.

“She was a small number of personnel short of the minimum safety crew of 34. This is the minimum safe number to crew a ship for damage control, fire suppression, and other critical safety considerations,” Comdt King said.

The officer said this “one man deep” phenomenon (if one person is unavailable, the mission cannot proceed) has left the Naval Service in what is described by experts as a “fragile” state.

“When a vessel routinely operates at these lower manning levels, then a crew member becoming sick or getting injured can potentially affect the ship’s operations. Ships need to be robustly manned, given the nature of a routine MDSO (Maritime Defence and Security Operations) patrol,” he said.

“When a ship’s crew is diminished like this, it must get relief personnel, either from other ships or from personnel who are not supposed to be on sea rotation, thereby exacerbating an already stressed working environment.”

He said this routine disruption to a person’s shore time is causing them to seek alternative employment as a result of the disturbance to their families, and leads to an increase in the frequency of duties for remaining personnel ashore.

“This is untenable, and all the more alarming when one considers that the Naval Service has already had to tie up two of its fleet and LÉ Róisín is in dry dock for her midlife refit. This means that three ships, or one third of the entire fleet, are non- operational,” said Comdt King.

Cathal Berry, former second-in-command of the elite Army Ranger Wing, and who has just been elected to the Dáil as an Independent, says urgent action is needed to get all the ships operational.

It has also earmarked a further 22 boats that can be deployed at short notice in the event of skirmishes between British trawlermen and their EU counterparts.

In 2018, French and British boats clashed over access to shellfish off the coast of Normandy, and last year it was alleged that French fishermen had attacked Devon-based fishing boats with petrol bombs, as another shellfish ‘war’ broke out in the English Channel.

Fears have been raised that EU-registered fishing boats could clash with British ones inside or on the edge of the Irish maritime patrol area.

Mr Berry said that when it comes to negotiating a new common fisheries policy with the the UK, if we don’t immediately bolster our Naval Service “we will be laughed out of the room”.

“The British will realise we can’t back up what we’re saying,” he said. “Around 99% of the drugs coming into this country do so by sea. The deterrent isn’t there any more because not enough of our ships can go out to sea.”

UK News innomin - February 29, 2020
0
Young children as young as 10 ended up amid far more than 230 people rescued past thirty day period through a collection of...

Ireland innomin - February 29, 2020
0
A man has been arrested after a seizure of ammunition in Dublin last night. Gardaí in Coolock carried out a search of a...

More women are choosing to ‘self-partner’ instead of propose to a man on leap...

Wales innomin - February 29, 2020
0
February 29 is officially leap day, when women are traditionally supposed to propose to men. However, research by Argos suggests that...

Young children compelled into sex work amid 230 people rescued in...

More women are choosing to ‘self-partner’ instead of propose to a...