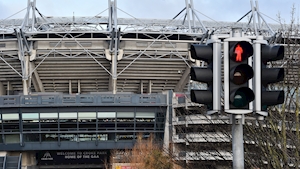 An appeal has been made to allow a Muslim festival at Croke Park to go ahead, after Covid-19 restrictions on mass gatherings were extended.

Though 500 people have booked to attend the Eid celebration in two weeks, the number of attendees may have to be cut by more than half as just 200 people are currently permitted to gather outside.

Eid is a major annual celebration in Islam and the event was planned ahead of the government decision to delay Phase 4 of the country’s reopening after the Covid-19 lockdown to August 10th.

Taoiseach Micheál Martin has been asked to make an exception similar to the one made for churches and mosques, that allowed them to increase the numbers attending services.

One of the organisers, Shaykh Dr Umar Al-Qadri from the Irish Muslim Peace and Integration Council, says an exception was made for Archbishop Diarmuid Martin to allow an increase in the number of mass goers:

“Similarly to the dispensation that was granted to the Archbishop a few weeks ago – indoor gatherings were limited to a maximum of 50, but then because Archbishop argued that many churches are large enough to accommodate more worshippers in the church, while still maintaining social distancing.”

He says Croke Park will also be able to accommodate the numbers on the pitch while facilitating social distancing, with attendees informed to wear their own mask and bring their own prayer mat.

“We will proceed with having our Eid at Croke Park with 200 people if we have to, but that will be very, very disappointing for many people. In fact, we have a waiting list for of about 400 people, in addition to the 500,” he said.

Staff ought to be given proper to do careers from property, states Labour |...

UK News innomin - June 18, 2021
0
Staff ought to be given a proper to do their careers from property, Labour has demanded as it piled strain on the government...

Staff ought to be given proper to do careers from property,...