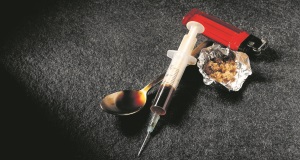 A mother who lost three sons to heroin in three years has pleaded for more treatment places and for needle- exchange programmes to be scrapped.

Carmel Kidney, of Ballincollig, Cork, said she is heartbroken to see a rise in open drug-taking on the streets of Cork city, with heroin use particularly evident.

And she said that while supervised injection centres might save some lives, they will not deal with the root cause of the heroin problem.

“I have wracked my brain to see what could be done to stop this poison,” said Ms Kidney.

“The only way I can see out is to get rid of the needle-exchange programmes. Don’t give them needles.

“People should not look down on these people. They are human beings. They came into the world exactly the same as everyone else. We should not turn away from them. We should help them.”

Ms Kidney said her sons were great characters with their own talents until heroin took over their lives.

“I never thought this would happen to us,” she said.

She said she feels all three were failed by the State when they tried to get help for their addiction.

Criteria for acceptance onto treatment programmes — including being methadone free for six months — were far too strict, she said, and, as they spiralled further into addiction, they still had free access to needles.

Needle-exchange programmes were introduced as a harm-reduction measure,to prevent the spread of diseases through needle-sharing but Ms Kidney said giving out clean needles facilitates the addiction.

“I believe they died because they got needles,” she said. “They have to stop giving them needles. If that was stopped, you’d see a big change.”

She also called for a relaxation in the criteria for acceptance onto treatment programmes and for a massive increase in the number of treatment places.

“Nobody should have to go through the pain my family did,” said Ms Kidney.

“It breaks my heart visiting their grave. But they are happy now. They are at rest and at peace and that’s what keeps me going.”

A number of Garda operations have targeted the sale and supply of heroin in Cork in recent months.

A Lithuanian man was jailed for four months during the summer after he was observed in suspected drug transactions on Washington St, Fort St, Vicar St, and at the gates of Bishop Lucey Park on Grand Parade.

In early September, an Irish man in his 30s with an address on the city’s northside was before the courts after gardaí seized an estimated €105,000 worth of heroin at Kent railway station.And in July, a man in his 30s, with an address in Blarney, who was described by gardaí as “a very significant drugs wholesaler”, was jailed for 17-years for a range of drugs offences, including possessing heroin worth just over €104,000 for sale or supply.

Wales innomin - January 20, 2021
0
A Government-backed money guidance service expects to have received a call about debt at least every four minutes during its opening...

Helplines forecast receiving a call about debt every four minutes in...