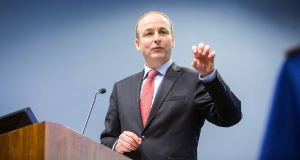 The Fianna Fáil leader has refused to rule out reports he will be a rotating Taoiseach in any new coalition government with Fine Gael.

Micheál Martin said talks between both parties are at an advanced stage, and he hoped a framework document could be finalised by the end of next week.

Deputy Martin did confirm that any coalition between Fianna Fáil and Fine Gael would be based on “equal partnership”.

But he would not be drawn on talk of a rotating Taoiseach.

He said: “Look I’m not going to get involved in that speculation other than to say myself and the Taoiseach did discuss this some weeks ago in terms of the agreement we reached to allow the talks to commence and proceed.

Meanwhile, today’s Dáil proceedings are being boycotted by the Labour party.

The House will meet this afternoon for a three-hour session to debate the response to Covid-19.

However, Labour has argued TDs should be supporting the “stay at home” message and not having non-essential sittings of the Dáil.