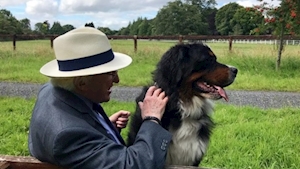 One of the President Michael D Higgins’ dogs, Síoda, has died.

The sad news was revealed in an emailed newsletter to journalists from Áras an Uachtaráin.

Síoda had been recovering after an operation earlier this year.

Síoda will be sadly missed by Bród – the Higgins family’s second dog – as well as by the President, his extended family, and the whole of Ireland.

Bród and Síoda have been features of the Áras since President Higgins took office, welcoming visitors and were often seen going on walks in the Phoenix Park with the President.

People have taken to Twitter to express their sympathies and fondness for Síoda.

My heart is broken for Bród. Poor Síoda, RIP. Condolences to @PresidentIRL & Sabina. The loss of a much loved pet. A nation of dog lovers mourns.💔 #RIPSíoda pic.twitter.com/667YJaNXFb