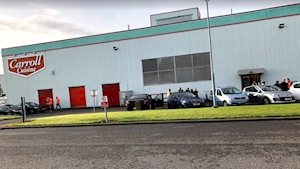 The Carroll Cuisine meat processing plant in Tullamore, Co. Offaly is to suspend operations to prevent the spread of coronavirus in the community.

It says the break will be taken over the days ahead while the results of Covid-19 tests carried out on staff yesterday are being evaluated.

Carroll Cuisine insists employees will continue to be paid as normal while operations are suspended.

This comes after, Minister of State Sean Fleming, who represents the Laois-Offaly constituency, called on the Carroll meat plant in Tullamore earlier today to voluntarily close.

“I am calling on them to close, to show solidarity with the local community,” he told RTÉ radio’s Today with Sarah McInerney show.

“I expect that before this day is out that this factory will close. Three out of the four have done the right thing.”

Mr Fleming said that if the Carroll meat plant “doesn’t do the right thing” then the State will have to take action.

If all four factories at which there were outbreaks of Covid-19 in recent days were closed down it would be “a big boost” to public confidence, he added.

He was encouraging the Carroll meat plant to close down voluntarily so that the State would not have to do so. “They should do the right thing.”

It was important to remember that the counties of Laois, Offaly and Kildare were not in lockdown, he said. People can still go to the shops, they can still go to work, even outside the three county area.

The onus was on management in the meat companies to ensure that they have a safe work environment for their staff. Mr Fleming called for “rolling” testing in meat plants as had been done in nursing homes.

Keeping community transmission down was vital, he warned, as the State was facing into the “single biggest logistical exercise” in the coming weeks with the reopening of schools. “We have to be very vigilant.”

On the same programme Sinn Féin’s David Cullinane said that any factory that was a source of an outbreak should be closed. It was odd for a Minister of State to call on a factory to voluntarily close down “over the airwaves” he said.

“Of course they should be closed. We have to get tougher.” There had to be an onus on companies to comply with regulations, but they could not operate under self assessment, he said. “If any company cannot operate within the guidelines then it should close.”