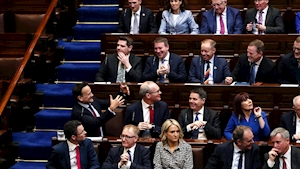 Sinn Féin leader Mary Lou McDonald has accused Fine Gael and Fianna Fáil of being “arrogant, dismissive and self-righteous,” after she failed to secure enough votes to be Taoiseach.

Ms McDonald secured the most support this evening in a drawn out series of votes where she, Fine Gael’s Leo Varadkar, Fianna Fáil’s Micheál Martin and the Green Party’s Eamon Ryan all put themselves forward for Taoiseach.

After a number of speeches from TDs supporting the different leaders for the positions, Dáil voting got underway.

Ms McDonald came out on top with 45 votes for Taoiseach, 84 against and 29 abstentions.

She was followed by Mr Martin who won 41 votes, but saw 97 deputies opposing him for the role and 19 abstaining.

The Dáil has now been adjourned until March 5, after no candidate secured enough support to be Taoiseach.

Mr Varadkar is set to go to Aras an Uachtarain tonight to tender his resignation but said he would remain on in acting role running government, as will the outgoing ministers.

He assured the public that a working government would continue until a new administration is agreed.

There was a need to agree a government that would last the next four to five years, he told the Dáil.

Fine Gael was willing to talk to other parties, he added.

But there were bitter words tonight between Mr Martin and Ms McDonald after the Dáil finished up the vote.

Mr Martin was strongly critical of Sinn Féin’s past, its policies around enterprise as well as what he called were different “democratic standards” operated by the party.

He claimed that victims of the troubles “never got justice”.

But Ms McDonald fired back that her party had secured the most votes for Taoiseach.

The Sinn Féin leader was highly critical of Fine Gael and Fianna Fáil’s refusal to negotiate with her party for government. She called the two “arrogant, dismissive and self-righteous.”