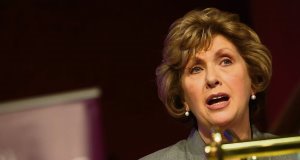 Speaking at Trinity College at an event called “The Women the Vatican couldn’t silence” Ms McAleese said she welcomed the decision by the Pope to reopen the question of admitting women to the permanent diaconate.

RTE also report the former President welcomed a recent call by the Association of Catholic Priests in Ireland for the role of women to be enhanced within the church.

Permanent deacons are ordained men who support priests but can be married and have jobs to support their families. Deacons perform a range of tasks but do not say Mass.

Former president Mary McAleese has called on the Catholic Church to allow women to become deacons, saying it would be a breakthrough in the ‘embedded misogyny’ which ‘goes very deep in the church’ | Read more: https://t.co/fmFWqyqhzr pic.twitter.com/zBsgAxfYyV