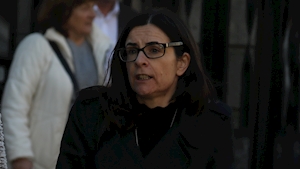 A mother of three who injured her feet, knees and wrist in a fall while training for a marathon, has been awarded €15,000 damages against Dunlaoghaire Rathdown County Council.

Forty-six-year-old Lisa Nagle, of Beechdale Way, Ballycullen, Dublin 24, was also awarded her costs which, together with the County Council’s legal expenses, is likely to cost the local authority another minimum of €30,000.

Nagle, an avid racer and club runner, told Judge John O’Connor in the Circuit Civil Court she had specifically trained hard for the 2015 Dublin Marathon in a bid to beat her previous two best times of 4:43 in 2013 and 4:01 in 2014.

Despite her injures she had succeeded just over a month after her accident in clipping 13 minutes of her previous best and was placed 3,903 out of the 20,000-plus runners who participated in the 2015 marathon.

Nagle told her counsel James Cross, BL, who appeared with solicitor Elizabeth Ferris, that she put her ability to compete so short a time after having crashed to the ground in an early Sunday morning practice run with clubmates, down to an intensive five-weeks course of physiotherapy prior to the marathon.

“I had trained so hard for that marathon and to improve my time,” she told Mr Cross. She said she had not run in a marathon since but had competed in five- and 10-mile races as well as cross-country runs following the 2015 marathon.

Counsel for Dunlaoghaire Rathdown County Council told Nagle her time had improved quite incredibly to get below four hours and he described her race as “quite a considerable accomplishment” which she had posted on Facebook.

Nagle said she suffered seriously with swollen and painful feet after the marathon and other races she had taken part in.

Judge O’Connor rejected a submission on behalf of the local authority that Nagle had exaggerated her injuries in circumstances where she had been physically capable to not only participate in the marathon but had run so particularly well as to score a personal best that had been significantly faster than her previous times.

The judge said Ms Nagle had been truthful in court and had not been one to deliberately exaggerate her claim. Some of her evidence had not been as clear as one perhaps would like and she had come across as someone who had a lot of trauma in her life.

“Her get-up-and-go attitude is to be commended.”

Judge O’Connor said Ms Nagle’s evidence that some of her injuries were still ongoing had not been borne out by medical reports. Consultant Robert McQuillan, who had examined her on behalf of the defendant, had expressed surprise she had complained of symptoms some two years after the accident.

Forensic engineer Alan Conlan told Judge O’Connor he had examined the steel grating into which Ms Nagle’s foot had slipped and he found there had been a catastrophic failure of the cover which had been too small for the shore.

Wales innomin - August 8, 2020
0
People have been enjoying their first proper night out in Cardiff since March, after the reopening of pubs indoors in Wales.Photographs of Cardiff...

Three women who say they were abused as children in the Jehovah’s Witnesses tell...

Wales innomin - August 8, 2020
0
When 16-year-old Sian sat down and told her mum she had been sexually assaulted, she said she was subjected to a...

How Cardiff’s first Friday night out looked after the pubs reopened...

Three women who say they were abused as children in the...