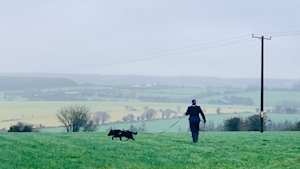 Gardaí have launched a manhunt for two suspects after a delivery van was rammed in north Cork.

Several garda units and the specialist garda search dog, Lazer, are scouring fields near the village of Glenville for two male suspects, described as being in their late teens or early 20s.

The search was mounted after a car was driven at speed into a delivery van in the area within the last hour or so.

The number plates on the car were covered.

Gardaí were alerted and were on the scene quickly but the suspects fled before abandoning the car and escaping on foot into nearby fields.

The search is focused on fields east of Glenville.

Gardaí have appealed to anyone in the area who sees anything suspicious to contact them on 112/999.

“One is wearing a grey hoodie and the other, a red jacket. If you see any suspicious activity call 112/999 immediately, don’t assume someone else will.

Any other good leads that help us make a collar would be welcome at Fermoy Tel. 025 82100,” gardai said.

Thunderstorm warning for all of Ulster and Leinster

‘We will not hesitate’ PM ready to impose more travel restrictions

Wales innomin - August 10, 2020
0
Boris Johnson has said ministers will “not hesitate” to impose a quarantine system for travellers from other countries to the UK...

Wales innomin - August 10, 2020
0
Residents are becoming concerned at the level of illegal dumping during lockdown after trolleys full of rubbish have started appearing. People...

‘We will not hesitate’ PM ready to impose more travel restrictions

Residents disgusted as trolley loads of rubbish are dumped on the...