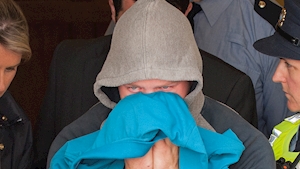 The jury in the Mitchelstown murder trial returned a unanimous verdict of not guilty of murder and guilty of manslaughter after six hours and 11 minutes of deliberation.

The accused man wept in the dock when the verdict was delivered. He also kissed the rosary beads which he kept wrapped around his left hand throughout the two-week trial at the Central Criminal Court sitting in Cork.

Michael Dineen kissed these beads before the verdict was delivered and again immediately afterwards. He silently mouthed the word, “thanks” in the direction of the six men and six women of the jury as they left Courtroom 6 on Anglesea Street for the last time in this trial.

Brendan Grehan, defence senior counsel said immediately after the verdict: “Mr Dineen wants to express his profound apologies and sorrow to the family of the deceased.” Mr Justice Alexander Owens adjourned sentencing until March 2 at the Central Criminal Court sitting in Dublin.

This is to allow for the preparation of a victim impact statement by the family of the deceased and for the defendant to have a probation report and prison governor’s report prepared. The accused was remanded in custody until the sentencing date having been in custody since the night of the killing last June.

The jury returned shortly before their unanimous decision with a question for the trial judge asking him to clarify again the law on provocation, self-defence and loss of self-control as a defence.

Michael Dineen, aged 28, of Ard Mhuileann, Mitchelstown, denied the charge of murdering 36-year-old Patrick O’Donnell at Willie Andies bar on New Square, Mitchelstown, on June 1, 2018. He admitted being guilty of manslaughter, not guilty of murder.

“God help me I killed a man,” was one of the first comments the accused made to investigating gardaí when they revealed to him that Patrick O’Donnell had been pronounced dead. The accused man asked for holy water and a bible.

Mr O’Donnell was pronounced dead after 11pm on June 1, 2018 on the floor of Willie Andies pub. The father-of-four had been drinking with Michael Dineen and others that night and after 10pm there was a brief row over a pint – where there was some evidence that the deceased believed the accused had taken his pint, the accused said he would buy him another one and the deceased said he would not take it.

The next thing that was seen by any witness was the deceased on the floor with the accused over him punching him in the face.

Patrick Ginty O’Donnell died from inhaling his own blood and teeth due to blunt force trauma to the head which he suffered in the assault, former State Pathologist, Prof Marie Cassidy testified.

He had lost seven teeth in the assault and she found one of these lodged in his windpipe and a second in a tract of his windpipe and she also found that his nose had been fractured and flattened.

Prof Cassidy found the accused was highly intoxicated at the time of the assault. This high level of intoxication combined with the fact that he had taken a number of tranquilisers, within the therapeutic range, was a contributory factor but not the cause of his death, she said.

In his closing address to the jury on Thursday, prosecution senior counsel Tim O’Leary said of the accused, “He was up and down the streets of Mitchelstown saying, ‘I am the king’. He goes home. He feeds his dogs. He takes off his clothes and showers. The guards call. He is upstairs shouting out the window, ‘Is he dead?’

Defence senior counsel Brendan Grehan said, “It is not a murder case. What happened on that fateful day was having way too much drink. He met with his friend Paddy O’Donnell. Without there being any background, any animosity, he ends up killing him after a bar-room fight.

“In a murder case, someone plans it, someone lays in wait, shoots him dead, drives away and burns out the car. In this case there is no pre-meditation, there is no weapon, there is no reason for Mr Dineen to have killed Paddy. This just blew up out of absolutely nothing. Murder is the intentional taking of someone’s life – it is not the stuff of the bar-room brawl. It is obviously over something stupid like this.

“The deceased man got a pretty bad beating. There is no escaping it. There was a frenzied attack with both fists to his face. It (row over a pint) is typical of the kind of misunderstanding that can occur when you have a lot of drink on board.

“Can you be satisfied beyond reasonable doubt that he intended to kill or cause serious injury. I am suggesting there is doubt all over the place in relation to that.”

Ireland innomin - September 24, 2020
0
An adviser to the World Health Organisation has backtracked on his recommendation that Ireland should allow Covid-19 to spread in a "controlled" way...