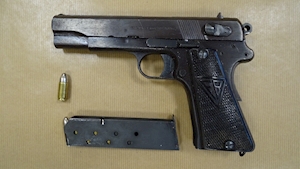 A man in his 30s is due in court in connection with the seizure of a loaded gun in Dublin on Friday.

Ammunition was also discovered when a premises was raided in Clondalkin, while two men were arrested.

Gardaí said that the intelligence-led operation has prevented a potential shooting.

The man is due to appear before the Criminal Courts of Justice at 10.30am this morning.

Another man in his 20s, also arrested as part of the investigation, remains in custody.