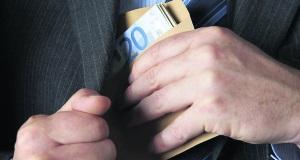 A man who was caught money laundering more than €380,000 and in possession of €80,000 worth of cocaine has been jailed for seven years.

David Farrelly (31) was under the influence of valium when he went into Ballymun garda station and said he wanted to take responsibility after gardaí found €364,000 in cash and a pistol in a box in his stepfather’s home in September 2017.

“I won’t let my da get the blame for that,” Farrelly told gardaí at the time, Dublin Circuit Criminal Court heard today.

However, when questioned by gardaí the following day, Farrelly denied any involvement in the crime.

His fingerprints were later discovered on the plastic wrapped around the cash, but Farrelly said his stepfather must have taken the plastic out of his home.

Farrelly’s home was placed under surveillance and the following year he was caught during a raid with more than €84,000 worth of cocaine in a portakabin in his garden and €26,000 cash.

Farrelly has 45 previous convictions including drug possession, drug dealing and road traffic offences. His stepfather, who was described in court as a father figure to him, was previously jailed for four years for his role in money laundering and possessing the firearm.

Handing down a seven year sentence today/yesterday (TUES), Judge Martin Nolan noted money laundering was a serious offence which helped criminals to operate. “He was helping that process,” he said.

Garnet Orange SC, defending, said his client’s difficulties arose from a chronic fatigue condition he suffers from called fibromyalgia. This has caused him to be in constant pain and led to him becoming addicted to prescription drugs.

He has suffered from depression and was unable to live a normal life or play with his children, the court heard. He worked for a time fixing boilers but lost his job.

Since going into custody, Farrelly is drug-free and has attended counselling.

“He is sorry for what he as done,” Mr Orange said.