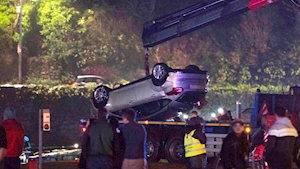 A man in his late 70s has died after the car he was driving went into the sea in Galway.

A multi-agency search and rescue operation was mounted at around 8pm last night at The Quay area of Kinvara.

The man who was the sole occupant of the car was brought to University Hospital Galway in a critical condition but later passed away.

The alarm was raised at around 8.10pm when, it is understood, people raised alarm at a local pub.

It is not clear whether they had seen the car in the water or actually witnessed it entering the sea.

The Irish Coast Guard mounted a major search and rescue operation and alerted a number of agencies.

Units of the fire brigade from Gort and Galway City, several National Ambulance Service resources and Gardaí responded to the incident while the Galway RNLI lifeboat was launched and dispatched to the area.

In the meantime, it’s understood a number of locals had entered the water in an effort to reach the car.

Gardaí are appealing for anyone who was in the area at the time to come forward.

According to one man: “They were trying to get someone out but they couldn’t.

According to onlookers a local trawler was used to haul the car closer to the pier.

The man was recovered from the car at around 9pm and efforts quickly began to resuscitate him on the quayside.

A truck with a crane was sourced and the car was recovered from the water at around 9.15pm.

Gardaí are appealing for anyone with information, particularly any motorists who may have been in The Quay area Kinvara between 7.45am-8.15am who may have dash cam footage to come forward.