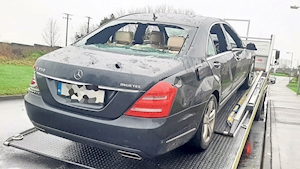 A Limerick Councillor whose home was attacked by masked men has said he will “not be intimidated”.

First-time Independent councillor Fergus Kilcoyne was back at work this Thursday morning, despite being “traumatised” by the violent attack on his family home, in the early hours of last Monday morning.

A number of masked men arrived at the home of the councillor and publican, in the village of Patrickswell, around 4.45am.

The masked gang smashed windows at the house and smashed up his car and his wife’s car that were parked up at the house.

Gardai are taking the matter extremely seriously but they have not commented on a possible motive for the attack.

Speaking this morning, for the first time since the attack, Mr Kilcoyne said: “It was horrific, horrific. My wife is in bits. She is not even sleeping at night, she is sitting up at night watching out the windows in case they come back, so the kids can get sleep.”

Visibly distressed as he spoke about the family’s ordeal, he explained that he and his wife were taking turns at night to watch out for possible further attacks on their home.

“We are taking turns in keeping a lookout, it’s gone that bad. No one should have to live that way,” he added.

Citing the kidnap and attack on Cavan businessman Kevin Lunney, the Limerick publican said he believed what happened to himself and his family last Monday was “a form of intimidation”.

“It’s a form of intimidation, that’s what it is. That’s all I have to say. It’s up the police now to do their job.”

Mr Kilcoyne said he, his wife, and their four children – all aged in their 20s – were asleep in their home when the attack occurred.

“The noise of breaking glass was like bullets going through the windows, such was the bang. There was eight or nine panes of glass that went in. The cars are probably written off, there was a lot of damage, between €30,000 and €40,000 damage done, in two minutes.”

Mr Kilcoyne added: “I wouldn’t know how you would describe them, but that’s what we are dealing with.

When asked about a possible motive for the attack he replied: “I’m not going to comment, that’s up the gardai.

Mr Kilcoyne, who has run The Dark Horse Bar in Patrickswell for the past “21 years”, attended a council meeting at City Hall this morning.

Speaking afterwards, he said, despite the attack, he remained undeterred in his work.

“I’ve to get on with life, but that doesn’t mean it isn’t in my head, what is going on. You just have to keep a brave front and fight on. No one has intimidated me yet,” he added.

Speaking following the meeting, fellow publican and Cathaoirleach of the Metropolitan District of Limerick, James Collins, said: “It’s a very difficult time for him and today there was unanimous support for him at City Hall.

“I urge anybody that has any information to come forward to An Garda Siochána. It’s a terrible thing to happen,” Cllr Collins said.

“Fergus is a first-time councillor. It’s not something we would like to see in Limerick, and hopefully the people responsible will, be brought to justice,” he added.

Fine Gael Councillor, Olivia O’Sullivan, also expressed her shock at what happened: “We all wanted to offer our solidarity to Fergus, and show our concern for him and his wife and children, and everyone I think, would agree, was appalled to hear what happened.”

“It’s a terrible threat on a public representative who is just doing his job and getting on with his life and business and family. It’s a threat to community, to family and also to democracy and it is also something that can’t anyway be tolerated,” she added.

Gardaí are taking the matter extremely seriously and have appealed for information.

A garda spokesman said: “Gardaí are investigating a criminal damage incident that occurred on the 25 November, 2019 in the Barnkyle area of Patrickswell, Limerick. At approximately 4:45am, a number of suspects caused significant damage to a house and two cars.”

“No arrests have been made and the investigation is ongoing.”

“Gardaí are appealing for anyone who was in the Barnkyle area between 4:30am and 5am on the 25 November and who may have witnessed the incident to contact Gardaí in Roxboro Road on 061-214340,” they added.