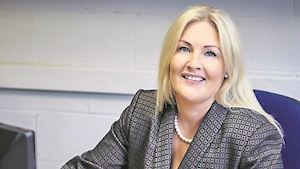 Taoiseach Leo Varadkar has stood by his Wexford by-election candidate Verona Murphy even though he admits her remarks about migrants were “wrong” and “misinformed”.

Pressed by the Irish Examiner this afternoon, while launching the national broadband plan in Wicklow, Mr Varadkar said he still had “confidence” in Ms Murphy and would campaign for her.

Ms Murphy has caused public outrage, after claiming that some asylum seekers coming to Ireland have to be “de-programmed” and they may have been infiltrated by the terrorist group ISIS.

“I think on some occasions, she has got it absolutely wrong. But she is the selected candidate. And I will certainly be campaigning with her before polling day.

“In relation to her comments that she made the other day. I talked about them to her yesterday. They were misinformed. They were ill-advised. They were wrong and she was right to apologise for them.”

Ms Murphy has since said the comments were a poor choice of words. Nonetheless, in today’s Wexford People, Ms Murphy is quoted further as claiming that ISIS has influenced children as young as three. She is also quoted as criticising drink-driving laws which she said had targeted “Irish” motorists.

Mr Varadkar told the Irish Examiner, when pressed, that he did still have “confidence” in the Fine Gael election candidate.

He also told the press conference:

Wales innomin - January 17, 2021
0
Within hours of Wales’ health minister Vaughan Gething telling a press conference on January 4 that closing schools would be...

Ireland innomin - January 17, 2021
0
The Minister for Health, Stephen Donnelly has announced the provision of an additional €10.68m in recurring annual funding for the voluntary hospice sector...

The chances of Wales avoiding a third fiasco of schools returning...