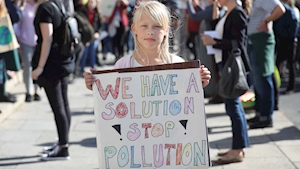 The Supreme Court ruling that will force the Government to review its climate action plan will have significant international repercussions, according to an expert from the United Nations.

For the first time in Ireland, and only the second time in the world, the highest national court has required a government to revise its national climate policy.

The case dubbed “Climate Case Ireland,” lodged by Friends of the Irish Environment (FIE) against the Government, argued that the State’s National Mitigation Plan does not do enough to tackle climate change.

Yesterday’s ruling rejected the plan as invalid and in breach of the Climate Action and Low Carbon Development Act 2015, overturning a High Court ruling last year which said that it could not second guess government policy.

United Nations’ special rapporteur on human rights and the environment, Dr. David R. Boyd, said: “This landmark decision recognises the urgency of responding to the climate emergency and sets a precedent for courts around the world to follow.”

Swedish environmental activist and founder of the school strike for climate movement FridaysForFuture Greta Thunberg congratulated the environmental campaigners who won the case.

Clodagh Daly of the Climate Case Ireland group said governments around the world must now be held to account: “All governments must be on notice now that they cannot make promises they will not be able to fulfil.

“They have a legal obligation to protect citizens from the worst impacts of climate change by reducing… emissions in the short-term, as well as the medium and the long-term.”

She said the ruling was a “huge victory” for climate justice in Ireland and the world.

Climate Case Ireland said Ireland currently has one of the highest levels of greenhouse gas emissions per capita in Europe, with emissions rising rather than falling.

“Ireland contributes disproportionately to the climate crisis, but we have the means to lead the… transition to a low-carbon economy and society… the Supreme Court has now affirmed that there is no legal basis for a lack of political will,” Ms Daly added.

With Government now having to return to the drawing board on climate change policy, the Green Party welcomed the Climate Case victory.

Green Party MEP Ciaran Cuffe said specifics are needed from all three parties in Government to tackle climate change: “If we don’t have the exact measures put down on paper, it’s very difficult to implement them. And look, for twenty years the Green Party has been saying we need to act on climate change.

“If we don’t have specifics, and if politicians talk in generalities, rather than say what we need to do with our energy, with our transport, with our agriculture, with our buildings, then we’re not going to achieve what needs to be done.”

Dad-of-four drove from London to Wales to steal £5,000 of cigarettes as he was...

Ireland innomin - August 5, 2020
0
The new 11pm curfew announced by the government yesterday could put thousands of jobs at risk, according to the Restaurant Association of Ireland...

MoneySavingExpert issues urgent update to those looking to take advantage of the Green Homes...

Dad-of-four drove from London to Wales to steal £5,000 of cigarettes...

MoneySavingExpert issues urgent update to those looking to take advantage of...