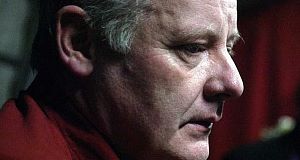 An arrest warrant has been issued for well-known actor Gerard McSorley after he failed to turn up in court to face a series of charges.

The Fr Ted actor was due to appear at Letterkenny District Court in Co Donegal after being arrested on November 26 last for a breach of the peace.

The 69-year-old actor had been taken to Letterkenny Garda station after engaging in threatening, insulting or abusive behaviour.

While at the station, McSorley continued to breach the peace.

He is also charged with damaging property while in the cell at Letterkenny Garda station.

Details of the second charge against the actor are revealed in the charge sheets which reveal how McSorley consistently spat at the cell door.

The charge reads: “(You) did, without lawful excuse, damage property, to wit, a cell door by constantly spitting on it during your stay in Garda custody and covering same in saliva resulting in the cell having to be cleaned belonging to Chief Superintendent of Letterkenny Garda station.”

McSorley, with an address at Trinity Court, Newtowncunningham, Co. Donegal, did not appear in court to answer the charges.

He also did not have any legal representation when the case was called before Judge Paul Kelly.

The actor, who has appeared in several films and TV plays, was famously Fr Todd Unctious in the Father Ted series and he also appeared in many well-known films including Braveheart, Veronica Guerin and Angela’s Ashes.

McSorley has previous convictions for a number of public order offences.

In 2016, he was convicted of damaging two flower pots belonging to Bank of Ireland in Bunbeg.

He paid the bank €40 compensation and apologised to the court.

In 2001, at Kilmainham District Court, he was charged with impersonating a member of An Garda Síochána for which he was fined €50 and was also fined €200 for drink-driving on the same occasion.

He is originally from Omagh in Co. Tyrone but has been living in Co. Donegal for many years.

‘I stopped cooking for three years after a crash nearly killed me and my...

Wales innomin - August 8, 2020
0
Lee Skeet never really had a plan in life apart from planning his next trip to a far-flung corner of the...

UK is ‘heading back into lockdown next month’, says former government chief scientist

Wales innomin - August 8, 2020
0
The UK could be heading for full lockdown again by the end of the month, according to former government chief scientific...

‘I stopped cooking for three years after a crash nearly killed...

UK is ‘heading back into lockdown next month’, says former government...