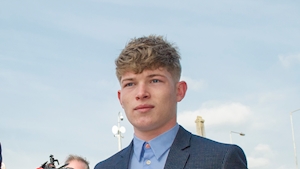 Joshua Allen was released from custody this afternoon to do a residential drug rehabilitation programme – three weeks after the prison door closed behind him.

The son of celebrity chef, Rachel Allen, was told that he first had to report to the probation service and then start immediately in Cuan Mhuire in Athy on the programme.

There was some disagreement at Cork Circuit Criminal Court over whether the residential treatment programme was for 12 weeks or 20 weeks.

The view of the probation service was that it was a 20-week programme for drug addiction treatment at that facility.

Ms Lankford said that whatever the duration, Joshua Allen would attend it for as long as was required.

Ms Lankford also said that it was a full-time programme, there was a bed there for the defendant and he would not be leaving it until it was complete.

It will be a matter for staff at Cuan Mhuire to notify the probation service in Cork if the defendant leaves or does not cooperate with the programme.

If that occurs the matter can be re-entered before the court at any time.

Otherwise, the case was adjourned until February 28 for sentencing.

Judge Seán Ó Donnabháin reminded all parties: “…All of this is strictly on everybody’s understanding I have not passed sentence and I have not indicated what sentence will be imposed. There are no guarantees for anyone in this court.”

Ms Lankford said earlier in the hearing today: “The accused has no difficulty complying… There is a bed and he is willing to go. He has addiction issues. He is anxious to get residential treatment.”

The defence senior counsel said that there would be no question of leaving Cuan Mhuire or “going in and out” over the duration of the programme – the accused will reside there fulltime for the duration.

The charge on which Allen is before Cork Circuit Criminal Court is one of having cannabis worth more than €13,000. Its actual street value was €22,000.

The crime carries a mandatory minimum sentence of 10 years unless the judge finds there are exceptional circumstances.

Detective Sergeant Michael O’Halloran said previously that gardaí were contacted by customs officers about a suspected parcel of drugs at the postal sorting office in Portlaoise.

A controlled delivery was made at 4.30pm on August 30, 2018, to Joshua Allen with an address at Ballymaloe cookery school, Shanagarry, County Cork.

Joshua Allen who was 18 at the time signed for it.

“He was observed sitting outside the shop, opening it and looking into it. He was then intercepted by gardaí,” Det Sgt O’Halloran said.

He was prosecuted on two possession of drugs charges for those. The most serious charge was of having the €22,000 worth of cannabis in the parcel for sale or supply.

Joshua Allen told gardaí this was his third or fourth time getting such a delivery of cannabis through the post.

He said it was from a lady in California whom he had met in East Cork. Rather than paying her by Western Union, which he felt could be traced, he travelled to London to pay her €2,000.

Ms Lankford SC said the young man Ballinamona, Shanagarry, had no previous convictions, he co-operated with gardaí when interviewed and he had addiction issues.