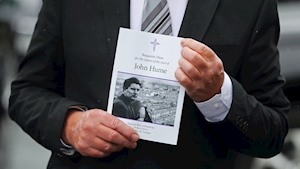 John Hume made peace visible for others even in the darkest moments, his funeral has been told.

Mourners heard that the former SDLP leader put everybody first and did not focus on difference and division.

His funeral service was held in St Eugene’s Cathedral in Derry earlier today.

“He focused on unity and peace, and giving that dignity to every person,” Father Paul Farren said.

“We should never underestimate how difficult it was for John to cross the road and do what was intensely unpopular for the greater good.

“Even in the darkest moments, when people would have been forgiven for having no hope, John made peace visible for others.

“His vision revealed what could be, and with time and determination and single-mindedness and stubbornness he convinced others that peace could be a reality.

“If ever you want to see a man who gave his life for his country, and his health, that man is John Hume. The world knows it.”

He told mourners that he was a Derryman to his core.

Mr Hume added: “If dad were here today, in the fullness of his health, witnessing the current tensions in the world, he wouldn’t waste the opportunity to say a few words.

“He’d talk about our common humanity, the need to respect diversity and difference, to protect and deepen democracy, to value education, and to place non-violence at the absolute centre.

“He might also stress the right to a living wage and a roof over your head, to decent healthcare and education.”

Derry musician Phil Coulter played ‘The Town I Loved So Well’ at the end of the service.

A statement from the Vatican said: “His Holiness Pope Francis was saddened to learn of the death of John Hume, and sends the assurance of his prayers to his family and to all who mourn his loss.

“Mindful of the Christian faith that inspired John Hume’s untiring efforts to promote dialogue, reconciliation and peace among the people of Northern Ireland, his Holiness commends his noble soul to the loving mercy of Almighty God.”

A message from the Dalai Lama was also read during the service.

“I was pleased to be able to meet John during one of my several visits to Northern Ireland,” he said.

“Indeed, his deep conviction in the power of dialogue and negotiations in resolving the problem in his homeland has been an example of non-violent resolution of issues.

“It was his leadership and his faith in the power of negotiations that enabled the 1998 Good Friday Agreement to be reached. His steady persistence set an example for all of us to follow.

“Although my fellow Nobel laureate is no longer with us, his message about peace and non-violence in the resolution of conflict, no matter how protracted or difficult it may seem to be, will long survive him. He lived a truly meaningful life.”