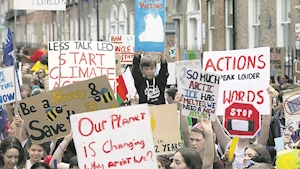 You could say Danny King jenga-ed his way into winning the chance to take part in what promises to be a momentous day for young people concerned about climate change.

Using jenga-blocks to illustrate how the world could come crashing down if we don’t adjust our values – like prioritising marine life over use of plastic bottles – he produced a thought-provoking video that helped secure him a place at next Friday’s RTÉ Youth Assembly on Climate.

The competition to be part of the Assembly also required the 10-year-old to produce a series of essays.

“I had to write five essays of 150 words each and make a one-minute video. I used Jenga Power to show what could happen if you value plastic bottles more than whales,” Danny said.

Danny, who attends Clonpriest National School in East Cork, is also on the Green Schools committee where they brainstorm ways to make their school more environmentally friendly – such as litter reduction, water conservation and greener transport.

“We’ve banned all plastics in the classroom,” he said.

Danny, from Killeagh, East Cork, has always been interested in the environment, more recently climate change.

Danny was one of three climate activists who appeared on RTÉ’s Today with Maura and Dáithí yesterday when they took over the studio to discuss the importance of combating climate change.

The other two guests were Saoi O’Connor, 17, from Skibbereen, Co Cork, dubbed the “Irish Greta Thunberg” and Ruth Cocoman from Dublin who makes a virtue out of sustainable living, including switching to thrifting/vintage clothes after learning about the damaging environmental consequences of the fast-fashion industry.

“It’s so easy to buy a cheap t-shirt, but people don’t fully understand the damage it [fast fashion] can do to the environment,” she said.

Saoi, who has become friends with Greta, said she believes those in government are hearing their voices, but aren’t actually listening.

“It’s confusing. I wonder how we manage to elect so many people who have no empathy,” she said.

Danny, Saoi and Ruth will all travel to Dublin on Friday when 157 young people aged 10-17 will convene in Leinster House to discuss climate change as part of the RTÉ Youth Assembly on Climate, in association with the Houses of the Oireachtas.

There will be debate on environment, economics, food and farming, power and education.

The delegates will outline what they see as the next urgent steps for Ireland to combat climate change. The event will be live-streamed from the Dáil Chamber in a News2day special live broadcast on RTÉ 2 and on Oireachtas TV.

Ireland innomin - August 9, 2020
0
The Government looks set to ban all non-essential travel from countries with high rates of COVID-19.According to today's Sunday Independent, under new proposals...

Ireland innomin - August 9, 2020
0
Gardai are investigating the death of a man in Dublin, whose body was discovered at a house in Drumcondra last night.Gardai had received...

These vicious robbers and would-be robbers have attacked pensioners, shop workers and students

Wales innomin - August 9, 2020
0
Callous, cowardly and remorseless are some of the words that have been used to describe these robbers and would-be robbers. ...