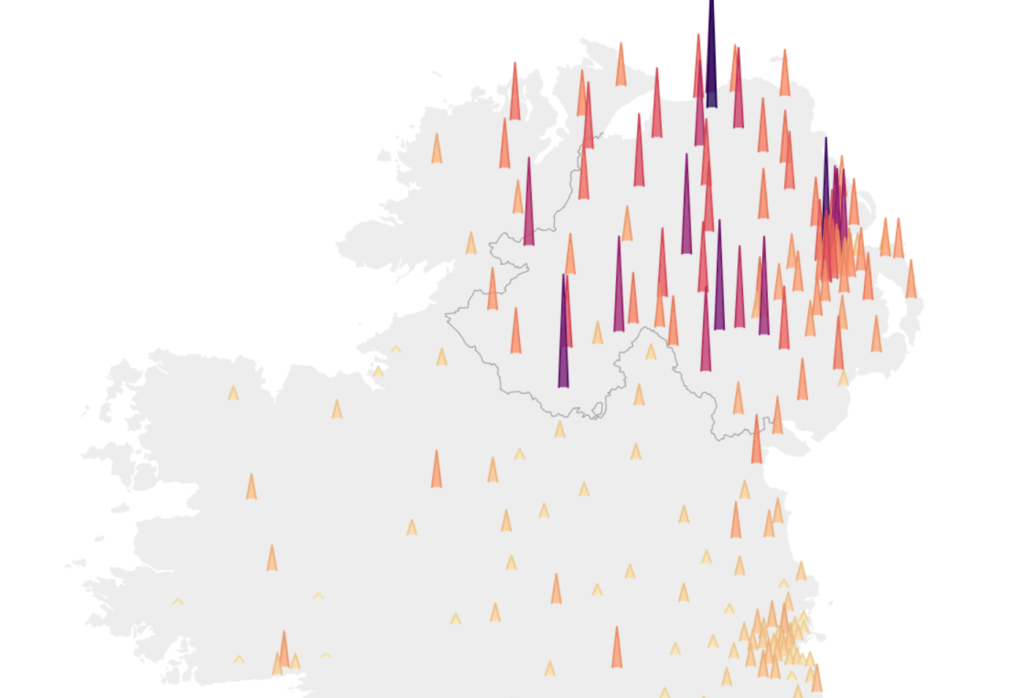 Northern Ireland continues to have a much higher rate of coronavirus infection than the Republic, new analysis reveals.

This comes as politicians on both sides of the Border decide on Covid-19 guidelines for the island ahead of the Christmas period.

Confirmed Covid-19 case numbers from electoral areas in the South and postcode areas in the North give an indication of how the disease is spreading in different communities.

In Northern Ireland the figures cover the two-week period from November 9th to 23rd, and in the South from November 10th to 22nd. Both sets of statistics use the incidence rate of infection per 100,000 of population, giving a better understanding of the spread than straight case numbers.

The BT52 postal district in Co Derry, which covers part of Coleraine and the north coast, had the highest incidence on the island during this time, with 874 cases per 100,000.

The BT13 postcode, which includes the Shankill Road area and other parts of north and west Belfast, had the next highest rate, with 802 cases per 100,000.

The areas in the Republic with the highest infection rates were in Co Donegal – Milford and Letterkenny had rates of 356 and 306 respectively.

However, these were lower than in the North. In neighbouring Castlederg, Co Tyrone, the incidence rate in the BT81 postcode stood at 547 cases per 100,000. In Derry city, the rate in the BT48 postcode was at 412.

Dundalk South and Waterford City South had the next highest rates in the Republic, at 299 and 285 respectively.

In Northern Ireland, the postcode with the lowest rate was BT33, which covers Newcastle, Co Down, with 91 cases per 100,000.

When comparing figures between the North and the Republic it is important to bear in mind that both jurisdictions are recording coronavirus cases and deaths in similar but distinct ways.

Stormont: Varadkar ‘out of touch’ over cross-Borde…

Nonetheless, cross-Border travel during the pandemic has become a political issue this week, with Stormont leaders lambasting “out of touch” Leo Varadkar over reports he told a parliamentary Fine Gael meeting that North-South travel may not be advised due to higher infection rates in the North.

Speaking in the Dáil on Thursday, the Tánaiste said the Government was not planning a ban to restrict the spread of coronavirus between the two jurisdictions.

Mr Varadkar maintained there would be restrictions on non-essential inter-county travel including North-South traffic as the Cabinet prepares to meet on Friday to finalise the next set of Covid-19 restrictions.

On Friday the North enters a two-week “circuit-breaker” designed to arrest the spread of the disease.