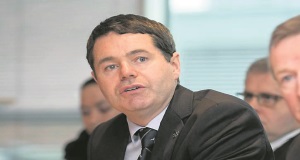 Ireland will have to prepare for a fall in lucrative corporation taxes in the coming years, the Finance Minister has admitted.

It comes as the Irish Fiscal Advisory Council (Ifac) warned that up to €6bn, or 60% of the corporation tax take may be “temporary” which leaves this country extremely exposed financially.

In its latest Fiscal Assessment Report, IFAC was critical of the fact that the Government is now relying on this uncertain and volatile tax source to plug spending overruns.

But Paschal Donohoe has defended the Government’s position claiming that this risk can be handled through increasing budget surpluses which his Department has already started to do.

“What I expect to see happen is our corporation tax will go up again next year,” he said.

Asked what level of drop in corporation tax is expected, Mr Donohoe said: “At this point in time it’s difficult to say.”

He added: “I think we will become clearer on that by the end of 2020 for two reasons.

“(Firstly) by the end of next year we will be clear on what’s happening on international taxation and what the very big countries in the world are looking to do.

“Secondly we will have a better understanding around those very big companies that have been exceptionally profitable in recent years.

“It should become clearer by the end of next year what their likely performance will be in the coming years.

“This is why we need to start increasing our surpluses now. If we do that we can deal with much of that risk,” Mr Donohoe told Newstalk Breakfast.

Around half of the total corporate tax take comes from just 10 companies, understood to include multi-national tech firms Google, Apple and Mircosoft.

“This, together with potential changes in the international tax environment, leaves government revenue particularly exposed to shocks,” Ifac said in their report.

The Minister said his Department recently published a paper which explains “many, though not all” of the drivers behind the significant increases in corporation tax in recent years.

“So I am quite clear on what is driving much of the growth.”