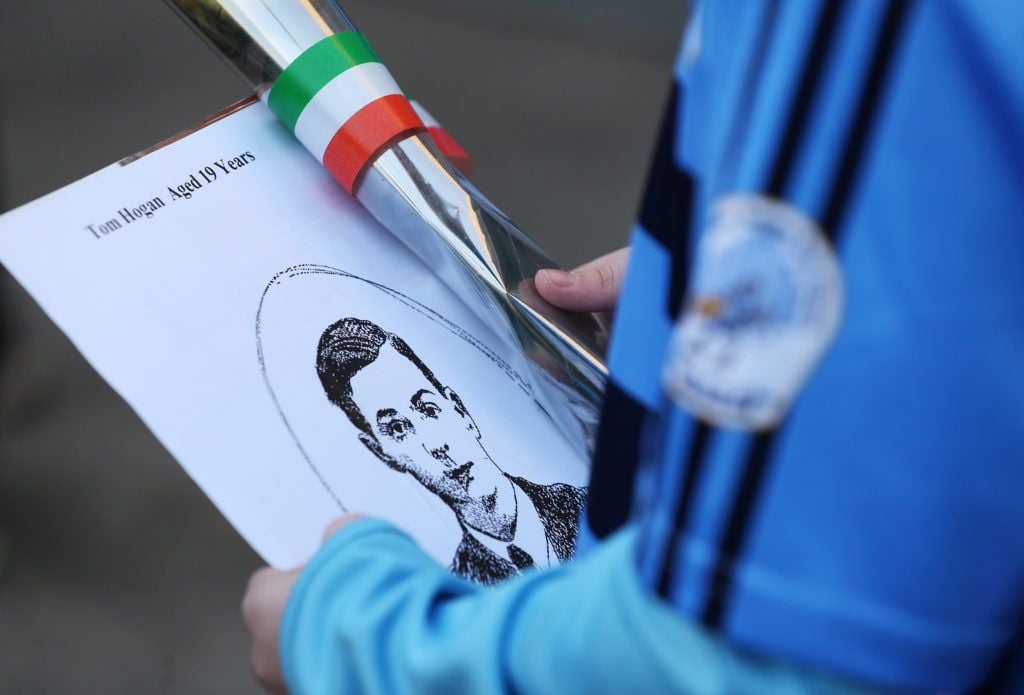 Ireland has marked the centenary of Bloody Sunday with a poignant commemoration in Dublin.

President Michael D Higgins and Taoiseach Micheál Martin were among those who attended the event at Croke Park.

One hundred years previously, 14 people were killed or fatally wounded by British forces during a Gaelic football match. Dozens more were injured in the 1920 killings which came during Ireland’s War of Independence.

Speaking ahead of the event during which he laid a wreath, Mr Higgins said many lives were irrevocably changed as a result of the events that day.

“We recall today those lost and those who suffered with a sense of profound sadness and outrage even, but also as a reminder of the fragility of the hard-earned peace to which we have become accustomed and the consequences that flow from the abuse of power and the failure of diplomacy and politics,” he said.

“That the events that took place can, in their brutality and casualness to the taking of life, still shock and challenge us all is to be understood.

“People from different backgrounds on the island may reflect on Bloody Sunday in different ways.

“We must respect this and be open to differing perspectives, and encourage a hospitality for these differing narratives of the events of that day.

“For all of us, to avoid becoming captives of any frozen version of the events of our past, we must find the courage to remember painful events with honesty.

“Doing this can only assist us in taking responsibility for the present and our shared, peaceful future together.”

Bloody Sunday 1920 is remembered as one of the most poignant days in Ireland’s struggle for independence. The violence of what happened in Croke Park still has the capacity to shock & move us. 100 years on, we remember the 14 people who lost their lives that day #B100dySunday

Mr Martin described Bloody Sunday as “one of the most poignant days in Ireland’s struggle for independence”.

“The violence of what happened in Croke Park still has the capacity to shock and move us,” he said.

Due to coronavirus regulations, only a limited number of people could attend the commemoration at Croke Park. The GAA encouraged those who stayed at home to light a candle.

The lives of the 14 victims were remembered in a ceremony that coincided with the lighting of 14 flames in a dedicated area of Hill 16 and a corresponding pillar of light dedicated to each of those who died.

There was also a performance of a specially commissioned piece of music by Colm Mac Con Iomaire.

It preceded a Leinster senior football final between Dublin and Meath.

On this day in 1920, 14 civilians came to a GAA match at Croke Park and tragically never returned home. On the darkest day in the history of the GAA and Croke Park, we mark the 100th anniversary of Bloody Sunday by remembering those victims; Jane Boyle, James Burke, pic.twitter.com/u9d3hFmvZw

Earlier, outside the main gates of the stadium, an unofficial commemoration took place.

There was a short procession led by a piper before pictures of the 14 killed and flowers were laid as a number of people watched on applauding each name as it was read out.

Bloody Sunday has been noted as one of the darkest chapters in the violent birth of the Irish Republic.

On the morning of November 21 1920, revolutionary leader Michael Collins directed an assassination unit known as “The Squad” to take out the core of the British government’s intelligence operations in Ireland.

The shootings took place in Dublin’s south inner-city and resulted in 14 deaths, including six intelligence agents and two members of the British Auxiliary Force, or the Black and Tans, as they were known.

Some of those killed were shot in front of their wives and children.

Later a crowd of 10,000 spectators gathered to watch a Gaelic football challenge match between Tipperary and Dublin at Croke Park, the home of the GAA.

The British forces, believing IRA men to be in the ground, set up a cordon and planned a stop-and-search operation.

As the game got under way, police trucks crossed the bridge over the canal and made their way towards the ground.

Five minutes after the match began, with the game still scoreless, shots began to ring out in the stadium. The 90 seconds of gunfire claimed 14 victims – Tipperary footballer Michael Hogan and 13 spectators.