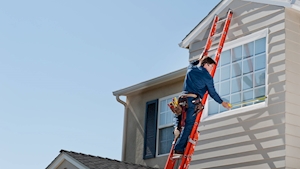 An insulation worker who suffered a crush injury to his finger when he slipped on a ladder as he worked on a house in Limerick has sued in the High Court.

Jonas Poska claims the grip of his left hand has been affected when his ring finger was fractured after it struck a wall as he lost his footing on a ladder. He was descending after pumping insulation into the house.

Opening the first personal injury case to be heard in the High Court in four months due to Covid 19, Mr Poska’s counsel Aedan McGovern SC, instructed by James McSweeney solicitor, said the young man had to have an operation for the displaced fracture and his hand was in a splint afterwards.

Counsel said it was their case that ladders should only be used as a last resort and that something like a cherry picker should have been available to Mr Poska who had to carry a pump gun with three hoses attached. Counsel said Mr Poska had made a good recovery but it was a serious injury and he continues to have a permanent restriction of movement on the ring finger.

Only 10 people including legal teams were allowed be in the courtroom for the hearing of the case before Ms Justice Bronagh O’Hanlon.

He has further claimed there was an alleged failure to provide proper safety equipment for the ladder in use.

The claims are denied and it is alleged there was contributory negligence on the part of Mr Poska and that he had allegedly failed to take any or any adequate care for his own safety and welfare. It is further contended that Mr Poska attempted to undertake a task in an alleged dangerous and unsafe manner.

In evidence Mr Poska said he was working putting in polystyrene bead insulation in a house and had gone up the ladder to pump the insulation into the wall.

“I was going down. I lost my footing. I swung to the left. My hand got caught,” he said. He added that he worked for another hour but noticed swelling and was taken to hospital.

He said guitar playing was his hobby but now he has difficulty holding a guitar.

Cross-examined by Bernard McDonagh SC for the defendants, Mr Poska agreed he did not fall off the ladder but lost his footing.