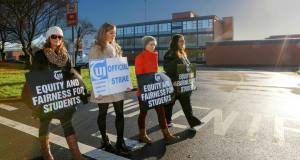 Hundreds of schools nationwide are to remain shut today as almost 20,000 educators strike over what they describe as an ongoing failure to eliminate pay discrimination within the teaching profession.

With Teachers’ Union of Ireland (TUI) members on strike today, virtually all of the 248 Education and Training Board schools, along with almost 150 community, comprehensive, and voluntary schools are expected to remain closed.

Disruption is also expected at institutes of technology and colleges of further education, where the TUI has a significant number of members among lecturing staff.

TUI president Seamus Lahart said: “19,000 striking TUI members are sending out an unequivocal message today to all politicians who are members of parties that aspire to being a part of the next government.

“Our campaign will continue until the discriminatory two-tier pay system, unilaterally imposed in 2011, is finally abolished.

“It is worth highlighting that the majority of TUI members are not personally affected by pay discrimination — they are striking in solidarity with the ever-growing proportion of colleagues who are affected.”

Teachers and lecturers who joined the sector since 2012 are paid at a lower rate for the same work as their colleagues, according to the TUI.

The union maintains that this has undermined the teaching profession and corroded staff morale which, in turn, has impaired services for students.

Last October, TUI members voted by an overwhelming majority, 92% to 8%, to engage in a campaign of industrial action, up to and including strike action.

Ahead of its upcoming ballot on industrial action over unequal pay, the Association of Secondary Teachers in Ireland (ASTI) instructed members not to carry out duties normally undertaken by TUI colleagues involved in dispute action.

Teachers employed after January 2012 earn more than €50,000 less during the first 10 years of their careers, compared to colleagues hired prior to that, according to Mike Lyons, TUI representative for Cork.

“This pay disparity is leading to major issues when it comes to recruitment and retention, and it is giving graduates the impression that teaching is an unattractive career option,” said Mr Lyons.

Secondary schools are currently struggling to recruit and retain teachers, with four out of five schools not receiving any applications for advertised jobs, a recent TUI survey suggests.

“The first is that teachers receive a starting salary of €37,000,” he said. “That figure does not take into account the fact that teachers begin their careers on a part-time basis and it can take up to 10 years before they have a whole-time post.”

The second misleading but often-aired trope is that pay cuts were originally initiated by longer-serving teachers.

“They did not negotiate a lesser pay scale for their colleagues,” he said, adding that such cuts were imposed by the Government.

Cork-based Pakistani man fears for his life if deported

Wales innomin - February 25, 2020
0
Yorkshire Tea has asked people to “try to be kind” after it received online abuse over a picture of Chancellor of...