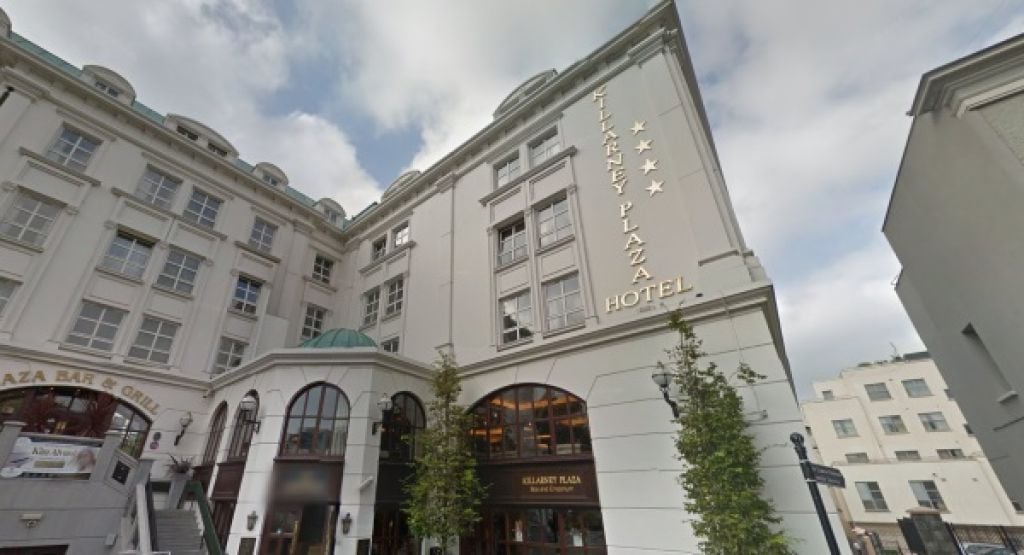 A man who was in a hotel lift which plummeted three floors to the ground has told the High Court in the seconds before it went in to free fall, the lift swayed and it felt like it was hanging on a thread.

Kevin Meehan ended up with multiple fractures to the spine and was in a wheelchair for three months after the accident when the lift at the Killarney Plaza Hotel dropped three floors crashing in to the underground basement car park ten years ago.

“There was an extremely loud bang and the lift dropped a foot. It swayed from side to side and it felt like it was hanging on a thread. There was another huge loud bang and it started to free fall,” he told Mr Justice Michael Hanna.

He added: “I saw the horror in my wife’s face. The next moment we were thrown to the ground with huge force. There was dust, smoke and glass everywhere. It was like a bomb going off.”

He said they had no phone signal in the underground car park where the lift had landed and the emergency phone in the lift and the alarm had disconnected.

“We were banging and screaming and shouting at the top of our lungs for help,” he said.

After two porters found them he said the emergency services were called.

Kevin Meehan had to be lifted out of the wreckage of the lift at the Killarney Plaza Hotel and was put on a hotel laundry trolley – the ambulance could not get to the lift where it had crashed in the basement.

The 43-year-old is one of five from the same extended family, including his wife, Jennie Wong, who have sued over the accident as they tried to return to their rooms in the Killarney Plaza Hotel after a wedding ceremony on July 9th, 2011.

Mr Meehan’s brother Andrew and his sister-in-law Patricia O’Leary from Co Meath this week settled on confidential terms their High Court actions as a result of the lift accident.

The court has previously heard liability was conceded in the case in 2019 and the cases are before the court for assessment of damages only.

Mr Paul Meehan’s case and Ms Wong’s case will be heard by the court next week.

In 2017 engineering company Ellickson Engineering Ltd, now in receivership, was fined €750,000 after it was found guilty at Tralee Circuit Criminal Court of a single breach of the Safety, Health and Welfare at Work Act over the installation of the hotel lift in and around April 2004.

Opening the case, Barney Quirke SC said Mr Kevin Meehan, who was 33 years of age at the time, suffered significant injuries including multiple spinal fractures as well as injuries to his knees and ankles. Counsel said Mr Meehan was in the most extraordinary pain, it is their case he also suffered suffered post-traumatic stress after the accident.

The case before Mr Justice Michael Hanna continues next week.

Ireland innomin - June 20, 2021
0
The Government is failing to address mental health issues within minority communities, according to a leading Irish psychotherapist.  Ejiro Ogbevoen who has 10 years experience...

Wales innomin - June 20, 2021
0
Public Health England's Dr Susan Hopkins said that 70% of adults in the UK should be able to get their second...