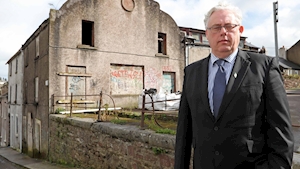 Homeless families and children protested outside Cork City Hall last night before a council meeting in which a vacant industrial site was rezoned for housing and a more aggressive approach to tackling dereliction was announced.

Mother of three Sarah said she, her partner Jason, and their children, were evicted illegally into homelessness by their landlord and have been living in emergency accommodation for the last eight months.

“I don’t see how we will ever get our forever home. It’s heartbreaking. We see no hope,” she said.

The Sinn Féin-organised protest was organised to highlight the scale of the housing crisis.

Sinn Féin councillor Thomas Gould said the city’s spend on homeless and emergency accommodation services next year is set to rise from €8m to €13.5m, and he said the Government’s housing targets are just not ambitious enough.

However, the city’s head of housing, Brian Geaney, said there are now 1,017 social or affordable housing units under construction in the city — more than any other local authority in the country — representing an investment of at least €270m.

“To put that in context — there was one house built in this city in 2014. This year, we will see an additional 650 social housing units added to the city’s supply,” he said.

And rapid-build housing is being considered for two sites.

Fine Gael councillor Des Cahill said all of the council’s social housing schemes submitted for government funding over the last five years have been approved.

“We will have €400m in our capital budget for housing for the next two years,” he said.

Earlier in the meeting, councillors agreed unanimously to approve the rezoning of the former CMP Dairies site at the junction of Tramore Road and Kinsale Road from ‘light industrial’ to ‘residential, local services and institutional uses’.

The 3.2-hectare site is vacant and its owners proposed rezoning to allow for consideration of a planning application for a primary care centre and residential development.

They estimate the site could accommodate 400 dwellings to provide homes for up to 980 people.

Councillors were also told that a housing proposal for the former Vita Cortex site nearby, which was placed on the derelict sites register two years ago, is being prepared and is due for discussion with the city’s planning department soon.

The council’s director of strategic development, Fearghal Reidy, also told councillors that they plan to adopt a more aggressive approach to the compulsory acquisition of derelict sites.

He said he signed orders yesterday to add three more sites to the derelict sites register, bringing to 102 the number on the list, with a further 21 being considered and 24 sites resolved.

Praise for gardaí who saved man after stabbing in Co Donegal

Ireland innomin - July 2, 2020
0
The State has agreed to pay the legal costs of an unsuccessful High Court action by 10 elected senators who contended a new...

Ireland innomin - July 2, 2020
0
The director of Ireland's largest aquarium fears they may have to shut their doors without a State rescue package to help to pay...

Ireland innomin - July 2, 2020
0
Dublin City Council ought not to have brought contempt proceedings against a receiver trying to sell residential properties which had to be vacated...