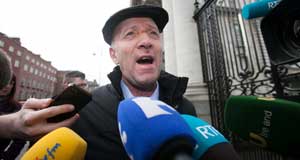 The Independent TD Michael Healy-Rae has declined to comment following a report he was attending a funeral in South Kerry in June 2018 while signed into the Dáil for a key address by EU leader Jean-Claude Juncker.

It is understood the Kerry TD attended a funeral in Sneem on the morning the European Commission president was in the Dáil.

Attendance reports compiled by the Oireachtas for June 21, 2018, show he still managed to clock in at Leinster House.

Mr Healy-Rae’s parliamentary assistant and son Jackie Healy-Rae was asked in Tralee on Friday if there would be a comment on the matter.

He said he himself would not comment on the matter and his father would be making no comment.

Last year the matter of the TD’s absence from the Dail during the visit by EU Commission President Jean-Claude Juncker on Thursday, June 21 was debated on Radio Kerry.

The issue arose after the Kerry Fianna Fáil TD John Brassil said Mr Healy-Rae was chair of the Oireachtas Committee on European Affairs and he should have been at the address and accused Mr Healy-Rae of snubbing the affair.

But Mr Healy-Rae said at the time he was absent from the Dáil because of a bereavement.