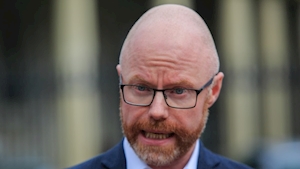 Minister for Health Stephen Donnelly has said that the Oireachtas Golf Society event in Clifden had been “an absolute disgrace” and “a slap in the face” for the public.

Mr Donnelly called on EU Commissioner Phil Hogan to “listen to the Taoiseach and Tánaiste” and to consider resigning because of the controversy from the event.

Speaking on RTÉ radio’s Morning Ireland, Mr Donnelly said that the Commissioner should consider his position as the fall-out from the event had eroded public confidence in Covid-19 public health measures.

“What happened in Galway is an absolute disgrace. It is a slap in the face for every man woman and family who has made sacrifices in so many different ways.”

Mr Donnelly added that as Minister for Health, he was less interested in what happened for any one individual. “What I have to focus on is making sure we are progressing this virus as well as we can.

“What really annoyed me about Galway is that it eroded people’s confidence quite rightly, people were furious and they were right to be furious. My message is the virus hasn’t gone away. We are at a tipping point in Ireland right now. We must do everything we can to avoid another national lockdown.”

Later on the same programme Green Party leader and Minister Transport, Climate Action and Communications Networks, Eamon Ryan said that Mr Hogan had clearly breached public health guidelines but that ultimately it was up to the European Commission President Ursula von der Leyen to adjudicate.

The Government had lost confidence in Mr Hogan, he said. It was important that the Government’s views on the matter be expressed clearly.

“No one wants to be in this position.”

Mr Ryan said that the Government was focused firmly on managing the pandemic. “We believe we can do it and do it well.”

On Newstalk Breakfast Minister of State for European Affairs Thomas Byrne said that it was important that public support for the European Union was not jeopardised by a Commissioner being seen to flout the rules.

The Irish politicians who had attended the event had lost their positions, if Mr Hogan had been a politician in Ireland he would have lost his job, said Mr Byrne.

It was clear that the Commissioner had breached public health guidelines, but it was a decision for Ms von der Leyen to make. He said he had no doubt that public confidence would be “massively undermined” if it was perceived that politicians could flout the rules.