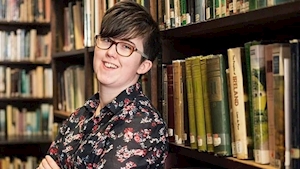 A handgun of the same type that was used to kill journalist Lyra McKee has been found by police in Derry.

It was discovered during a two-day search operation across a 38-acre area of land in Ballymagroarty.

The 29-year-old was shot while observing rioting in the Creggan area of Derry in April 2019.

Her killing sparked widespread condemnation across the world.

“The weapon found appears to be of the same type and calibre as the gun we believe was used to murder Lyra McKee, however at this time we are not in a position to say whether this is the murder weapon,” Chief Superintendent Bond said.

“The gun will be subject to extensive forensic testing in the coming days and weeks to determine if there is a link between this firearm and Lyra’s murder.

“That determination will be guided by the forensics.”

The search operation was designed to find weapons being stored by violent dissident republicans.

The haul by police also included a command wire-initiated bomb and a quantity of ammunition.

“A strong line of inquiry is that these munitions belong to the Real IRA. They have now been seized and will be subject to rigorous forensic examination in the coming days and weeks,” Chief Superintendent Bond said.

“The fact that these items were left close to a populated area, and particularly on land where children are known to play, yet again underlines the total lack of regard these violent terrorist criminals have for their own communities.

“These people are so singularly focused on murdering police officers that they do not care if others – men, women, children, families – are caught up in their evil plots. The community is simply collateral damage.

“Support and information from the local community is vital to fighting the scourge of terrorism.

“Anything you know, or anything you have seen – share that information with us and help us put these criminals out of business.

UK News innomin - August 9, 2020
0
“If we’d misplaced the war, we’d all have been prosecuted as war criminals.” So mentioned Curtis LeMay just after The usa obliterated Hiroshima...

Wales innomin - August 9, 2020
0
A warm, dry and sunny SundayThere will be an overcast start to the day, but cloudy skies will soon break up, according to...

Wales innomin - August 9, 2020
0
Music mogul Simon Cowell is to undergo surgery after breaking his back during a bike accident. The talent show star, 60,...

Simon Cowell taken to hospital after breaking his back in bike...