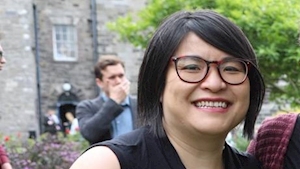 Dublin city councillors will vote in a new Lord Mayor and Deputy Mayor at a meeting later today.

Hazel Chu is expected to become the 352nd person to take on the top job, and just the ninth woman to do so.

Some of the perks of the job include taking up residence at the Mansion House and getting the first car registration number in Dublin for each new year.

Current Mayor Tom Brabazon has this advice for the Green Party councillor:

“To be herself is the best advice I can give to anybody is just to be yourself,” he said.

“I’ll have a chat with her later on,” he added, recalling how his predecessor Paul McAuliffe pulled him aside and gave him “valuable tips” when he took the office.

One of Mr Brabazon’s last acts as Lord Mayor was to honour citizens who volunteered to help out neighbours during the lockdown, presenting scrolls to 140 people nominated by their friends and neighbours.