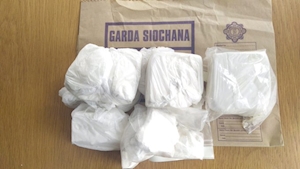 A large quantity of suspected MDMA and cocaine has been seized at a residence in Co Kildare.

A man in his 30s has been arrested and charged by gardaí following a search of the residence in Louisa Park, Leixlip on Saturday afternoon during which an estimated €600,000 worth of drugs was found.

Gardaí conducted the search at about 12.45pm on Saturday following an intelligence led operation by the Leixlip Drugs Unit targeting the sale and supply of drugs in Kildare, Laois and Offaly.

A number of additional searches were carried out in Kildare and Dublin on Sunday, but no items were seized and no arrests were made.

The man will appear before the Criminal Courts of Justice this afternoon.

Let virus spread among under 60s, Dáil committee to hear

Ireland innomin - September 23, 2020
0
A secondary school in Co Tyrone has closed after a number of confirmed cases of Covid-19.Holy Cross College in Strabane announced the closure...

Wales innomin - September 23, 2020
0
A wife has paid tribute to her “best friend and soulmate” who died in a motorcycle crash in Carmarthenshire. ...

Tributes paid to ‘gentle husband and soulmate’ who died in Llandeilo...