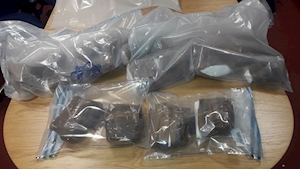 Gardaí have seized almost €1.5m worth of cocaine in Co. Louth.

Officers stopped a vehicle at the Donore Road Industrial Estate in Drogheda at around 12.35pm today and searched it.

They found packages containing 20kgs of cocaine with an estimated street value of €1.4m.

A man in his 30s was arrested at the scene and is being held at Drogheda Garda Station.

The arrest was carried out as part of Operation Stratus which is continuing.

UK News innomin - January 17, 2021
0
A halt to relegation for two seasons followed by the introduction of a play‑off in between the Premiership’s bottom facet and the winners...

Wales innomin - January 17, 2021
0
Millions of people aged 70 and over and those clinically extremely vulnerable to Covid-19 will be next to get the vaccine,...

Florida analyst who clashed with governor more than Covid details faces arrest | US...

Covid-19 vaccines to be rolled out to over 70s and clinically...