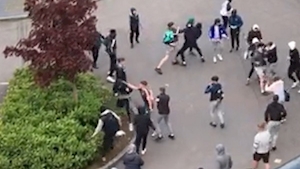 Video footage has emerged this evening of another mass brawl involving teenagers in a Cork suburb.

Gardaí now have several units from Douglas and Togher on “pro-active patrol” in the Douglas area following reports of anti-social activity in the area, many relating to a wooded area near Mount Oval Village.

The fighting broke out earlier when a large crowd of up to 40 teens gathered in the Granary Court area of the Mount Oval housing estate near Douglas.

Video footage from separate viewpoints which had emerged on social media shows a number of individual fights breaking out.

At one stage, up to three separate fights involving groups of up to seven people are taking place.

The footage shows several punches being thrown, people being struck in the face and on the head, and a number of young men being thrown to the ground, where punches, kicks and knees continue to rain down.

At one stage a group of up to 10 people can be seen attacking a young man who has fallen into shrubbery.

A number of teenage girls can be heard screaming stop.

At least one of them is holding up a mobile phone apparently videoing the activity.

A number of teenagers can be seen milling around nearby. They did not get involved in the fighting.

In one of the clips, a male voice is heard warning that guards are on their way and the teenagers disperse quickly, some on bikes but most on foot.

There are no official reports of any injuries.

A garda spokesman appealed to anyone with information about the incident, or concerns about anti-social behaviour, to contact their local garda station.

It is the second brawl in Cork involving teenagers in just over a week which has been captured on video and shared widely.

Gardaí were called to the scene of a fight involving two rival groups of teenagers which spilled into traffic on the main street near East Gate in Ballincollig on May 14.

Detective with PTSD brings action to prevent his dismissal

Ireland innomin - July 15, 2020
0
Opposition leaders responded to Barry Cowen’s sacking by heaping pressure on Taoiseach Micheál Martin as to when he knew of the details of...

Ireland innomin - July 15, 2020
0
More than 330,000 public servants have been directed to use annual leave or take unpaid leave to self-isolate for two weeks if they...

Ireland innomin - July 15, 2020
0
Former FAI CEO John Delaney has been ordered by a judge to provide the High Court with a sworn statement outlining what steps...

Opposition presses Martin on when he knew of Cowen drink driving...