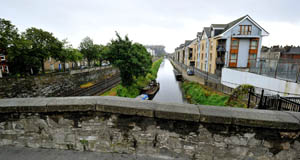 Gardaí are investigating an incident during which a women was pushed into the Royal Canal near Ashtown in Dublin.

A video emerged on social media of the woman being pushed by a group of young people after she told them not to be racially discriminatory.

The video shows the woman shouting as she is pushed into the water. Her condition following the incident has not yet been disclosed.

The video was posted to the video sharing platform TikTok on Friday but was then shared on other social media platforms.

The TikTok post and the associated accounts have since been deleted.

Gardaí confirmed they are looking into reports of the racially motivated incident and subsequent video.

60% increase last month in number of overseas visitors to Ireland

Wales innomin - September 28, 2020
0
A new law brought onto force on Monday means people who risk spreading coronavirus can be fined up to £10,000. Police...

David James warns of ‘lost generation’ except if grassroots football gets...