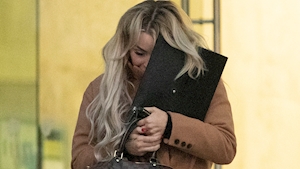 A man accused of attempting to murder a woman in her kitchen was dressed all in black and “agitated” and “aggressive” hours before the shooting that he denies, the Central Criminal Court has heard.

Detective Sergeant Noel Smith of Coolock Garda Station told the trial of Robert Lawlor (aged 35) that he met the accused near his home on the evening of the shooting.

He said Mr Lawlor was “aggressive” towards gardaí and later that night when Sgt Smith discovered Mr Lawlor was no longer at home he alerted the Armed Support Unit (ASU) and phoned Mr Lawlor’s ex-girlfriend Rachel Kirwan.

The trial also heard today from Ms Kirwan who repeatedly broke down as she was questioned about photographs of her current boyfriend Derek Mitchell. She told the court that she couldn’t answer the questions being put to her and that her “life is worth more than four photographs”.

He also pleaded not guilty to shooting a dog endangering its health and welfare at Moatview Avenue, Priorswood on May 26, 2018.

Det Sgt Smith today told prosecuting counsel John O’Kelly SC that he was in the Laytown area with his colleague Garda Killian Leyden at about 10.25pm on May 25, 2018.

They met Robert Lawlor on the Strand Road near to Inse Bay where Mr Lawlor was living with his mother. Mr Lawlor was dressed all in black, the witness said, with black leggings, black runners and a black jacket.

The witness went to Mr Lawlor’s home and spoke to his mother, Cecila Dillon. From that conversation he formed the opinion that Ms Dillon had “some concerns about Robert’s behaviour.”

Sgt Smith and his colleague remained with Ms Dillon and about five minutes later Mr Lawlor came back home. Sgt Smith said: “His behaviour was quite similar to what it was on the Strand Road. He became more aggressive in his stance towards myself and Garda Leyden.”

When Mr Lawlor’s brother arrived home the gardaí decided to leave. Driving around the area they met Mr Lawlor’s step-father Paul Dillon on his way home from his job as a taxi driver.

Sgt Smith said: “I informed him of my concerns and asked him to contact me when he went home if he had any concerns.”

Later that night Sgt Smith returned to Inse Bay and having spoken to Mr Dillon he formed the opinion that Robert Lawlor had left the house moments earlier. He said this caused him concern and he immediately rang Rachel Kirwan.

He then contacted the Armed Support Unit (ASU) and drove to Coolock Garda Station where he met two members of the ASU. While he was briefing them, at about 1.10am, he received a phone-call from Rachel Kirwan.

The witness said: “She was screaming hysterically, ‘get to Fiona’s'”. Sgt Smith told the ASU members to go to Ms Mitchell’s address and he followed.

When he arrived he saw Ms Mitchell standing outside her home. She was “hysterical” and shouted: “They’re in the house. They have guns.”

Two members of the ASU entered the house with ballistic shields and when they found nobody inside they gave the all-clear for other members to enter. Inside Sgt Smith noticed a hole in the kitchen door and he found Ms Mitchell’s dog Chopper dead in the back garden.

He said Ms Mitchell told him Robert Lawlor had “fired two shots or had fired at her”. He saw Ms Kirwan arrive a short time later and noticed that she was upset.

Giving evidence earlier this week, Rachel Kirwan said she had a relationship with Mr Lawlor for a number of years but started going out with Fiona Mitchell’s son Derek in 2017.

Although she said in a statement to gardaí that Mr Lawlor threatened to kill Derek Mitchell and his mother she told the court that she had lied and that Mr Lawlor never made any such threat. During her testimony she also described the Mitchell home as a “halfway house”.

She added that the house was “run like a business” with drugs being sold.

Mr McGrath showed Ms Kirwan four photographs and asked her if she recognised anyone in them. She initially said: “I’m not answering any questions about these photos,” but later identified Derek Mitchell in all four. She agreed that there was a second, taller man in the photos with him. She said she had never met this man but she did know his name. She added: “I don’t feel comfortable saying his name.”

Mr McGrath said: “All I’m asking for is his name.” Ms Kirwan paused before saying: “Kane Kirwan.” She agreed that the man is also known as Kane McCormack.

The witness agreed that the photos were downloaded from Derek Mitchell’s Instagram account but when Mr McGrath asked if she was the person who “obtained them from his Instagram” she said: “I’m not answering any more questions. I can’t.”

Ms Kirwan held her head in her hands as counsel repeated the question.

Mr McGrath said he would return to the issue and asked Ms Kirwan whether she had ever seen violence between Derek Mitchell and the accused. She said she had not.

She said she got her children out of bed and immediately went with Derek Mitchell to Fiona Mitchell’s home, thinking that Ms Mitchell had been killed. When she arrived, no more than 10 minutes after the phone call, she saw Ms Mitchell in her front garden and gardaí were already there.

Mr McGrath said this posed a “problem” as evidence suggests the shooting was at 1.02am and gardaí would say that they arrived at 1.25am. The witness said it took her a “maximum” of 10 minutes to get to Ms Mitchell’s home from the moment she heard the bang during the phone call.

When Mr McGrath returned to the issue of who downloaded the photographs the witness said: “I’m not answering that question.

Mr McGrath explained that he only wanted to know whether she printed the pictures. She replied: “I’m not answering that question” and she told him she couldn’t answer it. She added: “You can’t keep doing that to me.”

Ms Kirwan broke down in tears and held her head in her hands as Mr McGrath continued: “You printed these off in a chemist shop a week before this trial, didn’t you?” She again said she wasn’t going to answer.

Mr McGrath asked if she was in a chemist shop one week before the trial and she again refused to answer.

She again replied: “I can’t answer the question.”

Counsel said: “You did print them, didn’t you?”

She said: “I’m not answering.”

The trial continues in front of a jury and Mr Justice Paul McDermott.