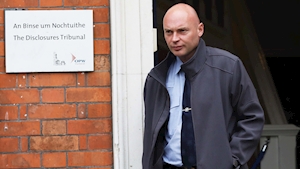 A chief superintendent has denied he wrote that a whistleblower Garda made up a claim that an alleged heroin dealer, accused of colluding with drug gardaí, was driving around the whistleblower’s midlands home.

Garda Nicholas Keogh has made complaints of targeting, humiliation and harassment against Chief Supt Patrick Murray, his Athlone superintendent in 2015, through issues relating to his investigations and work absences due to work-related stress and alcohol problems.

Gda Keogh’ also alleges his work was micro-managed under the direction of Chief Supt Murray. All the claims are denied.

In his protected disclosure made in May 2014 Gda Keogh alleged that a senior member of the Athlone drugs unit, identified to the tribunal as Garda A, was in an improper relationship with a heroin dealer, identified as Ms B.

The tribunal, chaired by Judge Sean Ryan, is investigating if Gda Keogh was targeted, harassed, undermined, or bullied after he made his disclosure.

Today it heard evidence that Gda Keogh made a Pulse intelligence entry stating that on 28 October, 2015, Ms B was seen driving her car around his Co. Offaly home, which then-Supt Murray reported as “an alleged observation [by Gda Keogh] that may lack credibility”.

Ms B later gave a statement to gardaí denying that she was in the area around his home on 28 October, 2015, and that her car was in a garage in Athlone at the time.

A Garda Lynskey reviewed CCTV footage twice placing Ms B in Athlone on the date and spoke to the garage owner, who said that Ms B’s car was in his garage on or around that date but was unable to be precise regarding the date involved.

Chief Supt Murray had previously denied to Matthias Kelly SC, for Gda Keogh, that he was taking the word of a heroin dealer above one of his own gardaí, when Chief Supt Murray queried the Pulse intelligence entry on the matter by Gda Keogh.

The witness said he did not intend to do that but could “appreciate how Gda Keogh would see that”.

Chief Supt Murray wrote of the intelligence entry by Gda Keogh: “It appears that Gda Keogh’s alleged observations regarding the presence of Ms B around his home may lack credibility.

“Neither did he report the matter to anyone other than GISC [Garda Information Services Centre, through the Pulse system].

“The creation of an incident by Gda Keogh, which he had intertwined with a whistleblower investigation, merits further explanation by the member in light of the clear assertion by Ms B that her car was in a garage that afternoon and that neither she nor her car were in [the area].”

Chief Supt Murray clarified to Patrick Marrinan SC, for the tribunal, that when he referred to the “creation” of the incident that he did not believe it was “just in someone’s mind” but was more concerned of the manner of the intelligence entry, in that it should have been accompanied by a report by Gda Keogh to local gardaí, as a possible security concern.