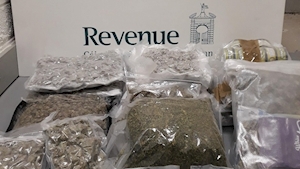 Nearly four times as many drugs were seized in Ireland’s mail centres last year as in 2018.

Another €1.4m worth of substances were recovered in the first four months of this year.

These new figures have been released by Revenue under the Freedom of Information Act.

They show a dramatic increase in the value of drugs seized at An Post’s mail four centres – Athlone, Portlaoise, Cork and Dublin.

By far the largest amount last year was in Portlaoise Mail Centre, which accounted for nearly €8m worth of seizures.

Security analyst Declan Power believes there’s a number of reasons for the increase.

“The increase might indicate that you now have smaller criminal groups trying to bring in prescription drugs or other drugs of that nature for sale,” Mr Power said.

“It would also perhaps indicate that there is a greater awareness by law enforcement and their levels of investigation, detection and apprehension have increased as well.”

Nearly half of the €1.4m worth of drugs seized in the first four months of this year were at Dublin Mail Centre.