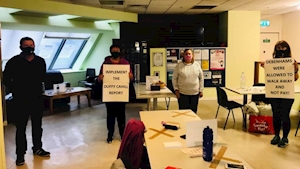 Five former Debenhams workers in Waterford have started an occupation inside the store at City Square Shopping Centre in the city.

The occupants are calling for talks between KPMG, Debenhams and the shop stewards & their representatives, Mandate Trade Union, to discuss how online business could be used for their agreed redundancy package for staff.

In a statement staff say they have seen KPMG escalate their attempts to remove stock from other stores.

Ex-Debenhams workers in Waterford have also seen the adverts for packers in Waterford and are urging people not to cross the picket and for KMPG to withdraw these non-unionised workers from all stores immediately.

Shop Steward, Michelle Gavin, an ex-Debenhams worker of twenty seven years and occupying the store says KMPG have launched an attack on stores this week to try and grab stock.

“So we’re fighting back. This occupation is a peaceful protest but a necessary escalation to make sure we are not left with nothing. We have been left high and dry without the redundancy packaged that had been promised before. We want KPMG to come back to the table for negotiations including shop stewards from the 11 stores to bring a positive end to the struggle the ex-Debenhams workers have faced for 172 days.”

Margaret Sinnot, who has worked onsite for fifteen years, said they have been fighting too long and hard “to let KPMG come in and try to walk all over us.”

“The strike has been ongoing for 172 days now, the picket is still strong and we are as determined as ever.”

The ex-Debenhams workers have said they have no plans to leave until they see movement from KPMG back to the table with the workers representatives for new negotiations.

It is understood that stock across the Irish Debenhams stores nationwide is worth in the region of €20 million.

Workers believe the liquidated stock and cash in the stores should be going in to the Irish redundancy pot.

Instead 2,000 workers in 11 shops are facing only receiving statutory redundancy.

When Debenhams shut their Irish branches just before Easter the company said it was “desperately sorry” to have to liquidate its business in this country.

In a statement the company said that they regretted having to close their Irish stores.

“In these unprecedented times, Debenhams is having to make exceptionally difficult decisions.

“Unfortunately, our Irish business has had trading challenges which were exacerbated by the impact of Covid-19.

“In the UK, Debenhams has entered into administration in order to protect its business.

“Regrettably, due to the challenges facing Debenhams Retail (Ireland) Ltd, it is anticipated that an application will be made to appoint a liquidator to the Irish operations.

“As you know Debenhams has already suspended trading in the Republic of Ireland stores and we can confirm that these stores are not expected to reopen.”

Debenhams opened its first outlet in the Republic in the Jervis shopping centre in 1996. Its big expansion in the Republic came in 2006 when it bought the lease for nine Roches Stores outlets nationwide.

Mandate trade union negotiated a redundancy package for Debenhams staff four years ago which included four weeks pay per year of service. This agreement is not being honoured by the company.

The workers have described as “insulting” an offer a few weeks ago by liquidators KPMG that a €1 million fund would be allocated amongst 1,000 workers in addition to statutory pay. In reality they say it would involve some workers receiving just an additional several hundred euro.

Wales innomin - October 22, 2020
0
Ireland has entered a second lockdown in a bid to halt the spread of Covid-19. The entire country moved to the...

Ireland innomin - October 22, 2020
0
TG4 have welcomed today's announcement by the Minister for Media, Catherine Martin that an additional €1.9 million will be allocated to TG4 in...