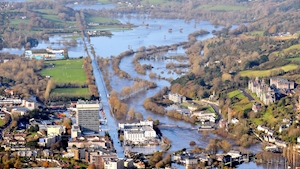 The escalation of a campaign by those misrepresenting the contentious €140m Cork flood defence scheme poses a real threat to the city’s future prosperity, the city council’s chief has warned.

Ann Doherty made her comments as new images of flood defence proposals for certain sensitive areas of the city were released by the team designing the Lower Lee Flood Relief Scheme (LLFRS) — the largest single investment in flood defences in the history of the state.

The images show how demountable flood barriers will be used along the North Mall and how a new boardwalk is planned for Fitzgerald’s Park.

They were released on the 10th anniversary of the devastating 2009 flood which saw a mini tsunami sweep downriver from the ESB dams and swamp the city with up to three feet of water, causing an estimated €130m worth of damage, knocking out water supplies to some 60,000 people, and triggering the declaration of a civic emergency.

The LLFRS has been in planning for the last decade, with final documents expected to be submitted for ministerial approval early next year. However, it has faced intense opposition, led by the Save Cork City (SCC) campaign group, which has criticised plans to raise quay walls in places, and which insists that a tidal barrier is needed.

Ms Doherty said the city is entering an exciting stage in its development, with nearly €1bn worth of office construction under way, up to 10,000 new jobs coming on stream, thousands of apartments planned, and with more to come.

“Yet, some groups and individuals who persist in misrepresenting the LLFRS have now escalated their campaign to oppose key infrastructural projects that are not even part of the flood relief scheme,” she said.

“This threatens the future development of our city, undermines local democracy and jeopardises funding commitments made to this city by central government.

“Individuals and groups are entitled to take this action, but be under no illusion, such decisions are not without impact.

“It has the potential to delay the development of Cork docklands, slow down inward investment, and inhibit employment creation for us and future generations.”

She said the LLFRS represents best worldwide practice, is holistic, evidence-based and rational, and crucially, is underpinned with a commitment of significant state investment.

“Cork, as a city, needs to come together, to deliver the LLFRS and thereby to ensure that the flooding event of 10 years ago can never again be repeated,” she said.