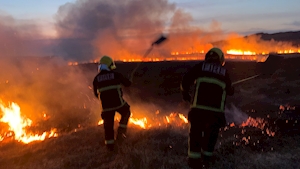 Firefighters in West Cork tackled two gorse fires in the region this evening.

A fire crew from Macroom was tasked to the scene of a gorse fire in scrubland just off the Killarney Road at around 5.20pm.

They had to return to the scene just before 6pm after the fire broke out again.

About an hour later, fire crews from Bantry and Schull were tasked to the scene of a large gorse fire near Bantry.

The alarm was raised just after 7pm. Crews spent well over an hour dealing with this fire on scrubland in Ballybane, in the townland of Cullamane, between Bantry and Drimoleague.

The fires broke out after what was a particularly dry and sunny day.