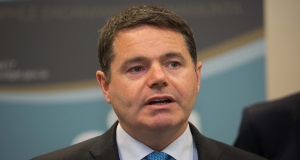 Finance Minister Paschal Donohoe has been accused of trying to “hide” a €24m payment from the State to Aer Lingus and Ryanair as part of a previously undisclosed legal settlement.

The Irish Examiner can reveal that the airlines had sued the State because they claimed the manner in which the 2009 air travel tax was levied was “illegal”.

Defending the spend of taxpayer money, Mr Donohoe said reports showed that if the case had continued, the airlines had put forward claims ranging between €145m and €190m, exclusive of legal costs.

It has emerged that the €24m settlement with the airlines was made without an admission of liability by the State and following a mediation process. The matter was discussed at a special meeting of the Oireachtas finance committee yesterday to approve the additional spending.

Mr Donohoe and his officials were accused of not flagging the settlement fully in documentation presented to members. The matter was listed under “consultancy and other services” as opposed to legal settlements. Mr Donohoe accepted it could have been clearer.

Under questioning, he said the supplementary estimate was required to meet the obligations entered into by the department in the context of the settlement agreements with Aer Lingus and Ryanair.

“This refers to a dispute that was ongoing regarding two airlines in particular, Aer Lingus and Ryanair, arguing that the airport travel tax had been, in their view, illegally levied,” said Mr Donohoe.

Under questioning from committee chairman John McGuinness, a Fianna Fáil TD, Mr Donohoe said the air travel tax was levied between 2009 and 2014, with €316m collected.

The airlines believed they were not being treated fairly by the design of this tax, said Mr Donohoe. Solidarity TD Paul Murphy asked Mr Donohoe if the case was ongoing and probably heading towards settlement, why was provision not made for it in the budget.

“Why do we have to deal with it in a supplementary estimate,” he asked.

Mr Murphy criticised the manner in which the settlement was accounted for.

“It doesn’t seem a very transparent way of explaining what the money is for and it’s certainly not for consultancy services,” he said.

Mr Donohoe said he took Mr Murphy’s point about how the payment was characterised in the documents. Speaking to the Irish Examiner after the brief hearing, Mr Murphy said: “This was not transparent. This was the opposite of that. It was semi-hidden and it may appear the department and minister were seeking to sneak this through.”

“It is quite a lot of money and it is concerning that the tax which had been levied on customers will end up in the pockets of big corporations.”

Introduced in 2009, during the crash, there was a €10 fee levied on customers, which was a standard tax, and then a two-year-old tax for airlines for airports that were within 300km of Dublin Airport.

“The view of the airlines at that point was that the design of the tax was unfair, and would have conferred a degree of competitive advantage and other airlines,” said Mr Donohoe.

Wales innomin - August 8, 2020
0
Britain is to call on France to crack down harder on migrants attempting to cross the Channel by boat, including taking...

Wales innomin - August 8, 2020
0
The family of a 76-year-old farmer have turned him into a worldwide hit on Tiktok because no-one understands what he's saying....

At final, a Booker prize longlist I want to study | Books

Farmer from Cornwall becomes worldwide hit on TikTok because no one...

At final, a Booker prize longlist I want to study |...