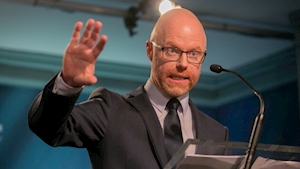 Donnelly surged to an impressive poll-topping victory in the last general election as a Social Democrat representative.

However, his move to Fianna Fáil has severely dented his support and now finds himself competing for the final seat in Wicklow with Fine Gael junior minister Andrew Doyle.

If Donnelly loses, it would be a hugely disappointing performance for the party locally with the loss of two seats. Donnelly’s party colleague, Pat Casey, has polled poorly and looks to be drifting out of contention.

On Sunday night, Sinn Féin’s John Brady was elected on the first count in Wicklow after topping the poll in impressive style.

Fine Gael’s Simon Harris and the Social Democrats’ Jennifer Whitmore, whose strong performance has exceeded local expectations, look set to take the second and third seats in this five-seat constituency.

The Green Party’s Steven Matthews has also polled strongly and looks on course to take a fourth seat.

The battle for the final seat looks set to be determined by whether Fine Gael’s Andrew Doyle can leapfrog Stephen Donnelly to avoid elimination.

Ireland innomin - April 4, 2020
0
UpdateThree men have been arrested by police in the North after two ATMs were stolen from banks in Dundalk, Co. Louth. The PSNI arrested...

Wales innomin - April 4, 2020
0
A motorcyclist died of his injuries at the scene of a crash with a bus at a junction in Cardiff Bay...

Motorcyclist dies of injuries at scene of crash with bus in...